Fans flood to a new way of football at Dulwich Hamlet – and it’s nothing to do with hipsters!

There is something a little bit special happening at Champion Hill. 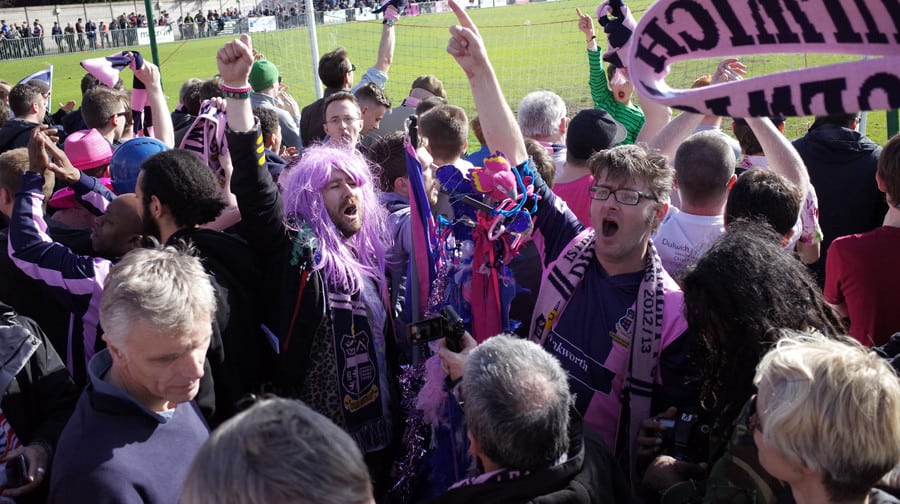 There is something a little bit special happening at Champion Hill.

It would be easy to simply point to the attendance sizes as evidence of a Southwark footballing revolution, with the number of people visiting Dulwich Hamlet FC’s picturesque stadium growing season after season.

Just five years ago, crowds rarely exceeded the low-hundreds. Last week, however, at a rainy mid-season league match against unglamorous Enfield Town, 2,249 fans packed into the ground – a higher draw than some Football League clubs three divisions above.

“I couldn’t believe it,” fan and Forward The Hamlet podcast creator Ben Sibley told the News. “When I first started coming two years ago, I used to stand by the turnstiles when people were arriving and I knew almost all the faces. Now I watch as people come in and I recognise hardly anyone!”

He may have recognised at least two new faces at the last game: former England football captain Rio Ferdinand and comedian Mickey Flanagan (who, admittedly, was decked out in Enfield colours), just two of the most recent fans to be drawn down to the Hamlet.

Dulwich Hamlet fans at the match against Enfield in January 2016.

The crowd size, however, is only the half the story, as anyone who has attended a game at the Hamlet will know. But, despite what some reports in the national media may have you believe, it’s not all to do with the “h-word.”

Ben said: “One paper did a feature calling us ‘London’s most hipster football club’, going on about craft beer and other things taken out of context. It was trash. Yes, some of it is true, but it’s missing the point. Dulwich Hamlet is one of the most famous, if not the most famous, non-league club. It has a fantastic history which has been ignored by other reporters.”

Hamlet’s 123-year history is certainly storied. Players as varied as Hussein Hugazi, who went on to become an Egyptian footballing icon, to Edgar Kail, the last non-league player to represent England at full international level, have pulled on the famous pink kit, while Dutch giants Ajax Amsterdam are counted among the teams beaten by the south London side. It’s impossible to ignore history at Dulwich, even when ordering a pint: at next Saturday’s match, the clubhouse bar will debuting a new beer named after a player who last wore a Dulwich shirt 83 years ago.

A packed Champion Hill, the home of Dulwich Hamlet FC.

But it is the evolution of the club’s unique ethos over the last few seasons which has really catapulted Dulwich Hamlet into the limelight and seen attendances first double, then quadruple, and continue to grow still.

Last season, the club played a milestone friendly against Stonewall FC, Britain’s first gay football team. Gay pride flags and union banners line the pitch and the crowd boasts a diversity of ethnicities and ages rare in football. On the path running alongside the pitch, groups of children play pick-up games while their parents watch the real action on the field. Even the crowd’s chants of “sexy football!” and “transpontine!” stick out as unique. It’s as much a place to take a date as to meet your friends for a drink – craft beer or not.

The players on the field are also doing their best to keep up with the progress off it, with the club currently sitting proud at the top of the Isthmian League – the seventh tier of English football. With a season run-in that includes home clashes with some of Dulwich’s main promotion contenders, it is likely that attendances will continue to rise as the season reaches its climax.

Ben said: “We thought it might slow down last season after the play-off loss but this season has seen crowds rise again. I just don’t know when it will stop. Obviously the crowd will be limited by the stadium’s 3000-person capacity so that might be it.”

With a proposed new, larger stadium on the horizon, however, even that limit may soon be breached. In a world of £70 Premier League tickets and millionaire footballers, a corner of Southwark has found itself at the heart of a new way of football, focusing on inclusivity, affordability and fun. Just don’t call the fans hipsters!

They are f*cking hipsters though.

Southwark NewsNewsFans flood to a new way of football at Dulwich Hamlet – and it’s nothing to do with hipsters!