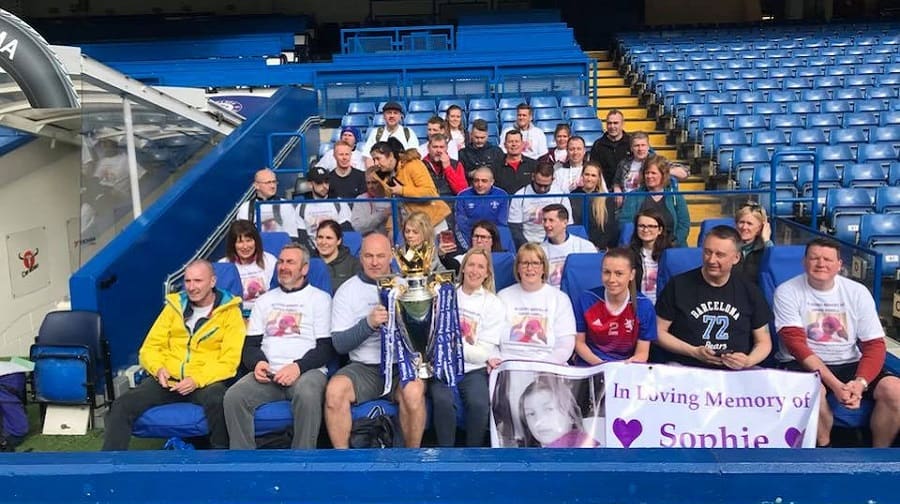 The family and friends of Millwall fan Sophie Powell, who died of kidney cancer at the age of eleven, have raised more than £24,000 in her memory after completing a 54-mile walk to all of London’s professional football clubs.

Sophie Powell’s parents Steve and Karen, 47 and 48, and twin Emma, twelve, were joined by relatives, friends – and even complete strangers – for the two-day sponsored walk, which began at Barnet and finished at Millwall.

In total 75 people took part in the challenge, including former Millwall players Jimmy Carter and Brian Horne who joined the group for part of the walk, as well as Millwall fans who travelled from as far away as the Netherlands and Scotland.

They managed to raise £24,283 (including gift aid) towards Sophie’s dream of buying a holiday home in the Isle of Wight for families with children battling cancer. The start of the walk at Barnet football ground

Overall, £85,735 has been raised in Sophie’s memory, which will also be donated to four charities close to her heart.

Speaking to the News, Karen said her family had been “overwhelmed” by the amount of support they had received and that they felt “incredibly proud” of both themselves and Sophie.

“It was tough going but nothing compared to the long journey Sophie had; she was definitely the inspiration for everyone to keep on going,” said Karen, who is a personal assistant but also works as a receptionist at Millwall on match days.

“It was great to spend two days walking surrounded by family and friends who support us and who loved Sophie. “Emma [Sophie’s twin sister] took it all in her stride and was leading the way – we are so incredibly proud of her.”

“The Millwall fans who flew in from the Netherlands said they were just inspired by Sophie’s story and they managed to raise £1,800 which is incredible,” said Karen.

The group managed to get pictures at many of the football grounds and even had the chance to see Chelsea’s Premier League trophy and were given a tour of Arsenal’s stadium. Karen said Sophie’s family felt “emotional and overwhelmed” by the end of the walk, which took them eleven hours each day.

“The amount we raised was beyond my expectations,” she added. “I didn’t have a figure in my head but it was fantastic to raise that amount and something for everyone who took part to be proud of.”

Sophie was just nine years old when she was diagnosed with a Wilms tumour, a form of childhood kidney cancer, in March 2015 – just weeks after her mum Karen also had surgery for a similar cancer. She sadly died in January 2017. Items donated by the London football clubs during the sponsored walk will be auctioned at a function after Millwall’s home match against Bristol City on April 7.

There will also be a Rangers Legends v Legends of Chels charity match held at Sutton United FC on June 9.