The man, believed to be in his twenties, was pronounced dead at 3.51pm. 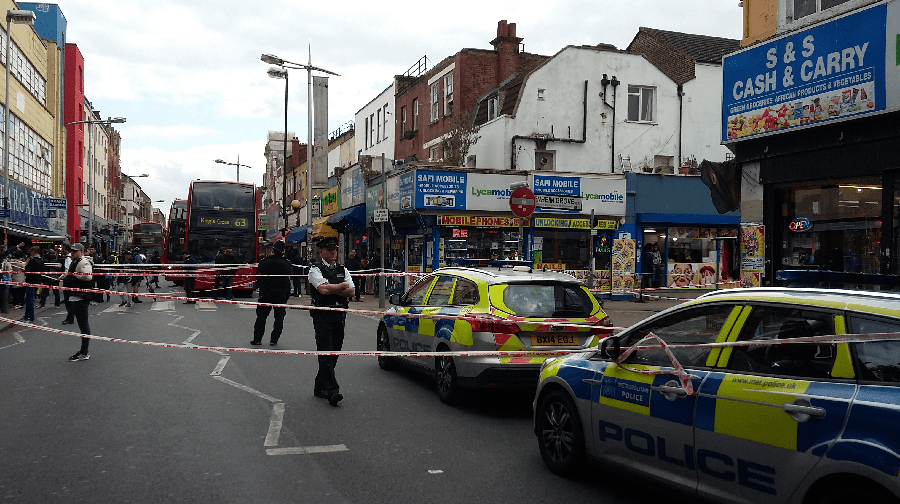 Police cordon at the junction between Rye Lane and Blenheim Grove

A man in his twenties was fatally stabbed in Peckham Rye this afternoon.

Police officers were called to the scene, at the corner of Blenheim Grove and Rye Lane, at 3.15pm, responding to reports of an altercation.

London Ambulance Service and officers attended and found a man with stab wounds. He was pronounced dead at 3.51pm.

A man in his twenties who did not want to be named said: “I couldn’t see them fighting but I could see bare people crowded around them.

“Loads of women came out of the salons. A lot of people were shouting.”

Mr Khan of Khan’s Bargains in Rye Lane told the News: “I didn’t see the actual fight, but I saw men from the car garage next to Bar Story were holding the boy after he was stabbed.

“He was holding the boy’s chest before the police came. The police came after a few minutes. I heard he was stabbed twice.”

Blenheim Grove is cordoned off to vehicles

Another Rye Lane shopkeeper told the News he saw two men in their early twenties arguing for about fifteen minutes.

He did not witness the stabbing itself but it is understood that while both men were being held back – as people realised what was about to happen – one of the men broke loose and stabbed the victim.

A police cordon runs the length of Blenheim Grove, which is now off-limits to all vehicles and only residents can access it.

A blue tent has been erected at the scene, outside JFS Exclusive Furniture and Wintana Beauty Salon in Blenheim Grove.

There are large crowds gathered, five police cars and a backlog of buses going down Rye Lane.