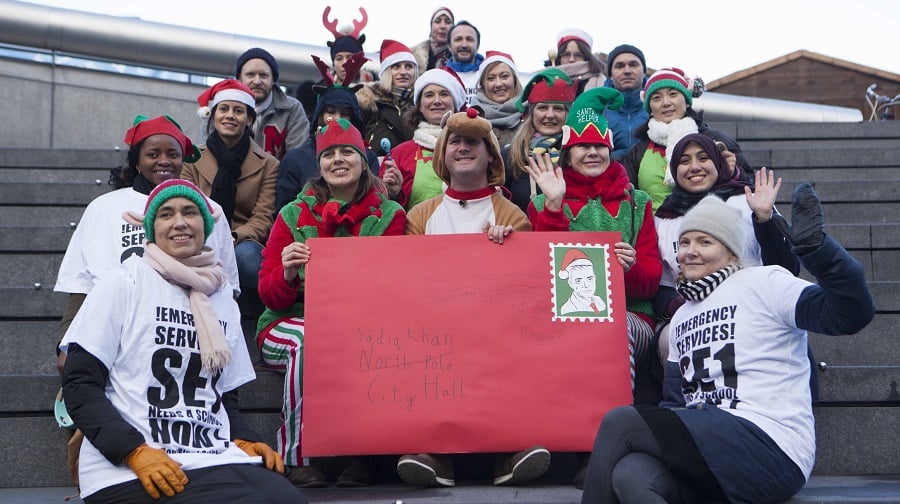 Parents dressed as festive characters delivered a petition with more than a thousand signatures for a new school to the Mayor of London.

The group descended on City Hall armed with a petition signed by 459 children and 735 adults, which called on Sadiq Khan to approve plans for a secondary school on the site of the old Southwark Fire Station.

A proposal was put forward by developer Hadston earlier this year for a secondary school and sixth form, sports hall and homes on the Southwark Bridge Road site.

However, the plans have been left hanging in the balance as they do not include any affordable housing.

After paying £54million for the site in 2015, Hadston said it was not viable to deliver affordable housing as well as the school and sports facilities.

The proposal is yet to go before Sadiq Khan – but parents have called on the mayor to make an “exception”.

Paola Wilson, who lives in the area and has a primary-aged son in Year 2, said families were “really dependent” on the school being built, as they faced having to move out of the area when their children reached secondary school age.

“There’s still a real shortage of places for boys in the area and there’s really no quality school that we could send our boys to,” the barrister told the News.

“We need something non-denominational as well because we have a large ethnic community in this area.

“It’s a hard decision for parents who are having to make the rotten decision to move out of the area.

“The reason we organised the rally was because we wanted to draw attention to the fact we really, really need this school and are really dependent on it and it’s disrupting the lives of children in these families having to move away from their lives and their peer groups.”

Ms Wilson said the plans should be treated as “a necessity” and that parents hoped they would be discussed at Southwark’s next planning committee in January.

“We believe the mayor should be doing everything within his power to move it forward to open in September 2019,” she said.

“It is our hope that he will be ensuring this school is an exception because it’s not just providing a block of flats, it’s providing a really important amenity for the area.”

The proposals submitted to the council also include plans for 199 homes, including a mix of one, two and three bedrooms, as well as converted fire station cottages for family homes.

A spokesperson for the Mayor of London’s office said the plans were yet to go before Sadiq Khan for his final decision and therefore a comment could not be made at this time.