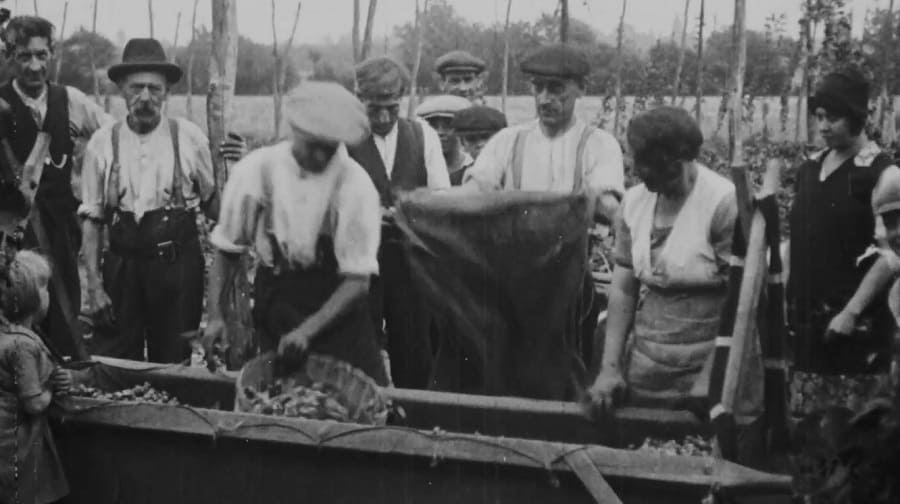 A silent film capturing the life of Bermondsey hop pickers will be shown for the first time in 80 years.

‘Oppin was first shown in 1930 as part of a public health campaign run by Bermondsey Borough Council.

Shot on 35mm film, the black and white film shows families in the area preparing for the hopping season and travelling to farms in Kent for the summer.

It was recently digitised by Southwark Local History Library and Archive and is now available for the public to view for free.

Heritage officer Lisa Soverall, who looks after the library’s film collection, said it was one of 30 films produced by the council between the 1920s and 1940s.

“They had quite a progressive way of getting public health out to the local people of Bermondsey and at that time there was a huge pandemic of diseases so they put out these public health campaigns and one of the ways they did that was through films because it could reach a much wider audience,” she told the News.

“Bermondsey folk spent their time picking hops during the holiday season and they were working holidays which provided a much-needed income for working-class families for things like a winter coat for a child.

“They would sometimes go for six weeks or more and often the children would miss the first couple of weeks of school so often you could tell the child who had been hopping.”

Viewers will see Bermondsey families getting ready for what they called the “’oppin season” and carrying out their duties on the Kentish farms.

“You see them putting all their belongings onto trucks, including chair and prams; it was literally like moving house for many families,” said Lisa.

“The families stayed in corrugated iron huts and they generally went as families but the husband stayed behind for work and would join them at weekends.

“You will see the tallyman come round to measure the hops, scenes of the hop warehouses, and picking the hops, and the circumstances around how they lived and socialised.

“Pre-1965 housing was pretty dire with the back-to-back pre-war housing and most buildings were not really fit for human habitation so for a working-class family to be out in the fresh air, albeit working, was too good to be refused.”

The film is on show at Southwark Local History Library and Archive, in Borough High Street, every day throughout October and can be viewed after this.