Southwark Council will undergo public consultation before making their decision 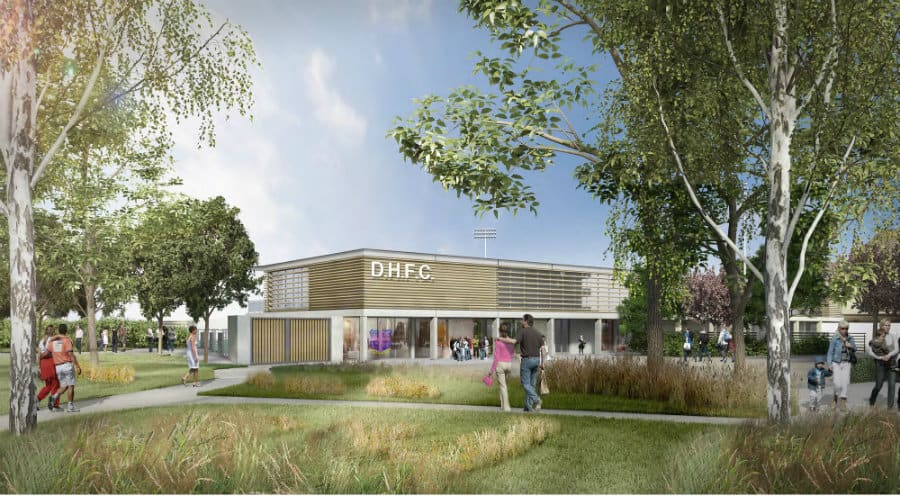 The proposed stadium as seen from the outside

Hadley Property Group has submitted its final planning application for the new Dulwich Hamlet Stadium, which now includes covered terraces behind each goal following a consultation with fans and residents.

The application will now be considered by Southwark Council, which will start its own consultation period in the near future.

The 4,000-capacity stadium will be of a high enough standard to allow the club to win two promotions, and will also include an all-weather 3G pitch.

Covered terraces behind each goal have long been sought after by Hamlet fans, whose current Champion Hill ground boasts no shelter at the ends of the pitch.

The application has come under criticism from green campaigners, however, who object to the plan to build on Metropolitan Open Land at the Green Dale Fields.

Council Leader Peter John also objects to the plan, posting on Twitter this week: “My views on the future of Green Dale have been clear since 2002 and have not changed. I am opposed to the Hadley scheme.”

He added that there were “still many flaws with application.”

Matt Rimmer from Hadley said the application marks “two years of engagement with local people, fans of the club and Southwark Council.”

He added: “Dulwich Hamlet is a special club with fantastic fans, who will rightly be given their club, debt-free, if the scheme goes ahead.

“We have also included Green Dale Fields in the application at the request of Southwark Council and remain committed to working with them to protect, enhance and maintain this site.”

Hadley Property Group? Hadley features nowhere on the application. I suspect the author must have confused them with the actual applicant, Greendale Property Company Limited, a company founded on the Isle of Man way back in August 2013, and allegedly the freeholder of at least part of the site. Hadley Property Group (and, by extension, its seventeen subsidiaries), on the other hand, is mostly owned by HPGL Holdings Limited, a more-recently established Hong Kong-registered firm that can only trace its roots back to November 2013.