London Fire Brigade called just before 6am this morning 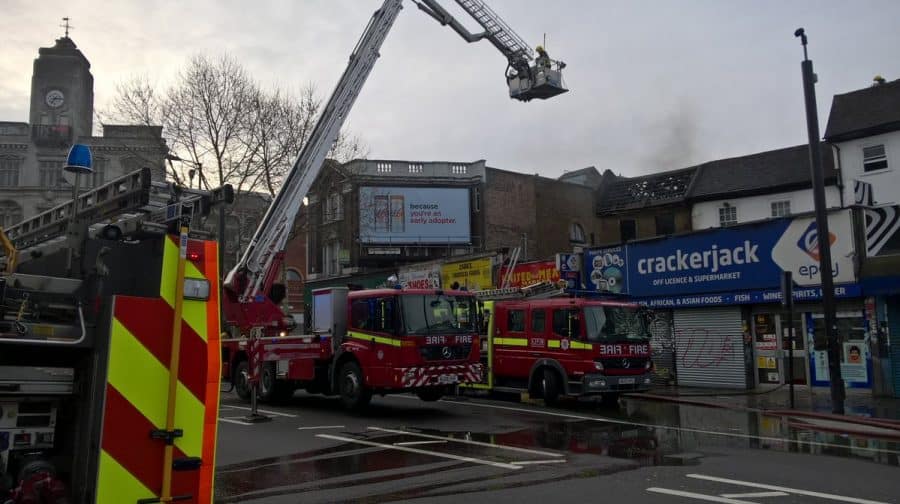 Firefighters at the scene

Ten fire engines and 72 firefighters battled a blaze in Peckham this morning.

The London Fire Brigade says it was called at 5.56am to a roof fire at a shop, with flats above, on Peckham High Street.

The brigade says the blaze was under control by 7.32am, after crews from Peckham, New Cross, Old Kent Road, Brixton and other surrounding stations attended the scene.

Firefighters are likely to remain at the site for the rest of the morning, and say the cause is being investigated.

A London Ambulance Service spokesperson confirmed no one was hurt in the fire, telling the News: “We were called at 6:11am this morning (17 April) to Peckham High Street, SE15, to reports of a fire.

“We sent an incident response officer, two ambulance crews and our hazardous area response team. The first crew was on scene in less than one minute.

“There were no injuries and we didn’t take anyone to hospital.”

Police said they attended in support after being called at 6.13am, and that Peckham High Street closed off by the London Fire Brigade in both directions.

Transport for London had confirmed by 10am that Peckham High Steet and Bellenden Road near the Aylesham Centre were both fully re-opened.

Total shout out to the amazing firefighters who stoppes this fire this morning ?? #peckham #fire pic.twitter.com/vCL30WetoS