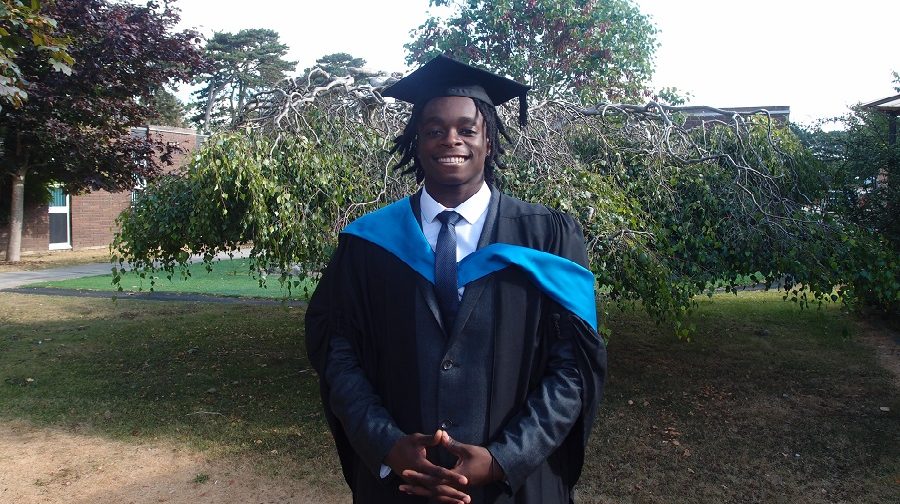 A university graduate from Peckham has secured a high-flying job at a globally recognised finance company on the day of his last exam – after applying for ‘at least a job a day’ during his final year.

Twenty-one-year old Stephen Adeoye, who grew up around Southampton Way, has been hired as a corporate analyst for US financial services company First Data, working for its Europe, Middle East, and Africa compliance team.

The former Walworth Academy student was offered the job on the day of his last exam at the University of Northampton, where he graduated with a first class degree in BSc in banking and finance.

Stephen said: “I originally wanted to study economics at another university, however I did not get in because I did not achieve the grades required.

“I knew I wanted to study a subject that involved finance and I wanted a degree that was going to translate into a prosperous career financially, so I was delighted to be accepted to study banking and financial planning at the University of Northampton.

“I started applying for jobs as soon as I began my third year, as I had been warned by one of my friends who had graduated that it can be difficult to secure the job you want after graduating.

“I went to one of the career advisers at the University, who gave me a template to tailor my CV into a skills-based resume.

“I applied for at least one job every day, mainly finance graduate schemes.”

“I had a lot of video interviews, but I was never successful when it came to the face to face interview.

“Eventually I landed a phone interview with First Data and I was invited to an open day to network with hiring managers and see what positions intrigued me.

“A few days later I was invited to the site for an interview with the hiring manager of EMEA compliance.

“On the day of the interview I presented my PowerPoint in front of three managers and was asked a range of questions. A few days later, I received a call that I had got the job.

“My mentor, Tambudzai Mangezi, the Head of Accounting and Finance at the University reassured me that I would do well, and she really believed in me which helped ease any doubts I had about not achieving a first class.”

“My long-term goal is to be part of a board as a chief control officer and eventually become a CEO for a reputable organisation.

“It is a very ambitious goal and right now I honestly know very little in my field, so over the next few years I aim to soak up as much information as possible and become a walking encyclopaedia on compliance, which will hopefully set me on the road to a successful career.”