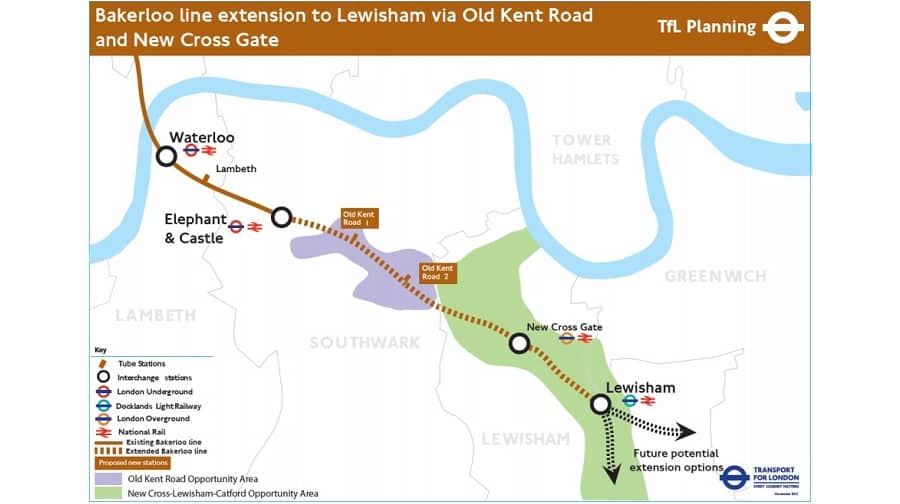 Transport for London’s consultation on plans to extend the Bakerloo Line has begun today.

TfL is currently working to a timetable that could see the extension finished by 2029.

The proposals include two stations in Old Kent Road, as well as in New Cross Gate and Lewisham town centre, and a capacity upgrade for Elephant and Castle station.

The new plans say that two new tunnels would be built 20 metres below ground, and that one of three new ventilation shafts would be built between Elephant and Castle and the proposed station currently referred to as ‘Old Kent Road 1’.

There are four preferred options for the two Old Kent Road station, referred to as 1A, 1B, 2A and 2B.

Old Kent Road option 1A is “near the junction of Mandela Way with Dunton Road”.

Option 1B is “near the junction of Old Kent Road with Dunton Road”.

Option 2A is “near the junction of Old Kent Road with St James’s Road”.

Option 2B is “near the junction of Asylum Road with Old Kent Road”.

One of three ventilation shafts would also be built either in the middle of the Bricklayers Arms junction, or at the south-east corner of Faraday Gardens, next to Portland Street in Walworth. The other two shafts would be built in Lewisham.

A statement from TfL said the development would be “vital” to help London’s infrastructure as its population swells to an estimated ten million by 2030.

Lambeth and Southwark’s London assembly member, Florence Eshalomi, said: “This is fantastic news for our community. We know that when we increase transport connectivity, we boost local economic growth.

“This plan could see more jobs and more houses for local people. It also means much improved access to central London and all it has to offer.

“With government cutting its grant to TfL, its only right that they take all reasonable steps to ensure this project is fully funded. If that means allowing the mayor to keep more money raised through business rates and stamp duty then that’s the way it’s going to have to be.”

London mayor Sadiq Khan said he was “delighted”, and that the project had “huge potential for new jobs and 25,000 new homes in the area”.

Councillor Mark Williams, Southwark’s cabinet member for regeneration and new homes at, said the extension would help with the council’s ambition to regenerate the Old Kent Road.

He promised a new high street with new homes “including at least 35 per cent affordable homes”, new shops and cafes, workspaces, parks and open spaces, and safer networks for cyclists and pedestrians.

Visit www.tfl.gov.uk/bakerloo-extension to take part in the public consultation and fill out a questionnaire.