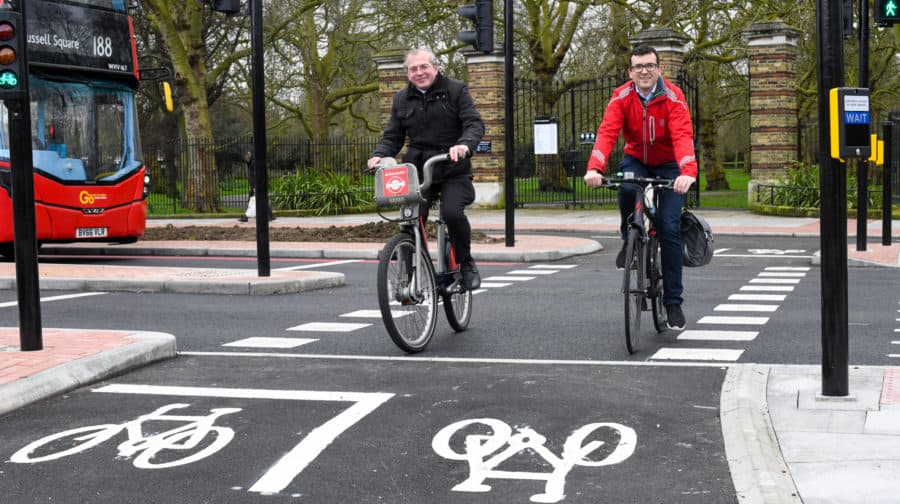 The first section of the Cycleway 4 route between Southwark Park Road and Rotherhithe roundabout has opened.

It is part of the construction of a major segregated cycle route from Tower Bridge, along Tooley Street, Jamaica Road and onto Deptford.

Once completed, it will see the route stretching from Tower Bridge to Greenwich.

“We’ve worked closely with TfL on this and the roundabout’s new, wider pavements, which will help pedestrians feel safer too,” said Cllr Richard Livingstone, who holds the transport brief at Southwark.

“I hope that the new roundabout and the imminent completion of Cycleway 4 along Jamaica Road and Tooley Street, will encourage people to take to Southwark’s streets, both on foot and by bike.”

Motorists have complained of delays to their journey while work is ongoing to build the route along Jamaica Road.

TfL says the works on this particular stretch of the route will be complete by May, and advises drivers to seek other routes where possible.

Will Norman, who is London’s walking and cycling commissioner, said that the route would allow for more journeys to be taken by foot or bike, to clean up the capital’s air pollution.

“By creating new crossings and segregated routes in Rotherhithe, we are making it safer and more convenient for many more Londoners to walk and cycle, which is crucial to clean up our toxic air,” he said.

Work is still ongoing on a further section of the route in Deptford’s Creek Road, with work on nearby Evelyn Road in begin in May.

Construction work on a number of other Cycleways across London is also ongoing, including Cycleway 9 between Brentford and Olympia in west London.