The ground has had its gate smashed, goal nets snapped and stands graffitied 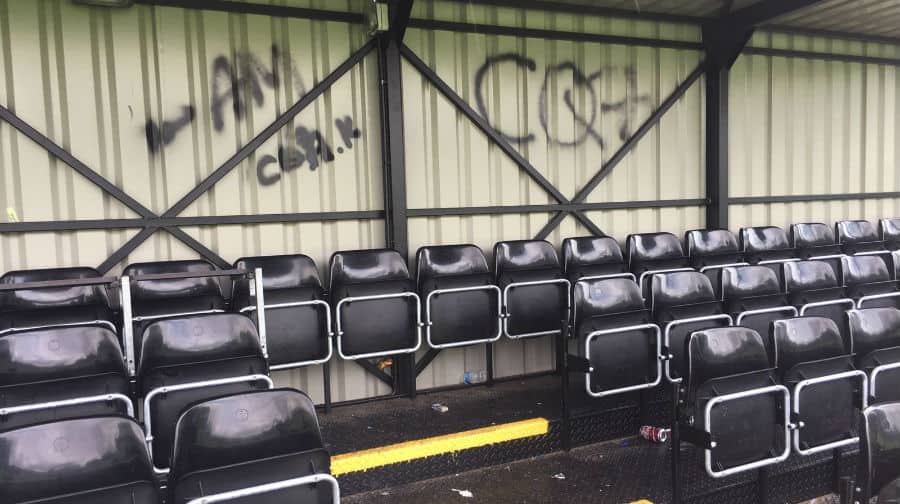 Fisher FC’s manager has slammed Southwark Council, calling it “incompetent” over its handling of the club’s return to Rotherhithe, after their new stadium was vandalised.

The team’s new Salter Road ground has had its gate smashed, goal nets snapped and stands graffitied and they have been told they cannot play any games there until at least September.

First team manager Dean Harrison told the News of his outrage at the way the transition was being handled and called the situation a “farce” that “reeks of incompetence”.

He said: “The council are now saying we can’t play any pre-season games at the ground because the dressing rooms aren’t fitted out.  They’re also saying we won’t be able to play league games until at least September because they haven’t put a management team in place to run the facility.

“Our season starts in August, which they’ve known from the start, so we now have to hope that we can find a ground to play at and hope the league will be sympathetic to our cause!

“Bearing in mind the keys were handed over to the council in March, the whole situation is a complete farce and reeks of incompetence on their behalf.”

Since 2004 Fisher has shared a stadium with Dulwich Hamlet FC at Champion Hill and returning to the north of the borough has always been a goal.

But even though the pitch itself is finished, there will now be an open tender process to decide the leaseholder, which could leave Fisher as tenants at their own ground.

Stephen Evans, a Fisher FC board member, said: “Getting the new stadium built has been done in partnership with the council. But we are concerned about delays and uncertainties since it was completed, and the damage to it.

“We are also concerned by reports that Fisher could end up just as tenants – this will affect the viability of club and wasn’t what people were led to expect.

“We understand that the Council will begin a procurement process shortly. It’s vital that, whatever its outcome, Fisher are at its heart and not just tenants – a sustainable community-based Fisher was the driver for the facility in the first place.”

The News previously reported how Southwark Council vowed to “ramp up” security at the new 3G ground after up to 50 youths were seen playing on the pitch.

A council spokesperson said: “We are keen to get Fisher FC into their new home ground as soon as possible. We have been in contact with the club and will continue to work with them to plan ahead for the new season.

“We are repairing any damage caused by vandals and have also put seven day security in place to ensure the facility is kept in the best condition possible, until the new management is in place at the end of August.”