They took turns trying to score goals past Jimmy Bullard 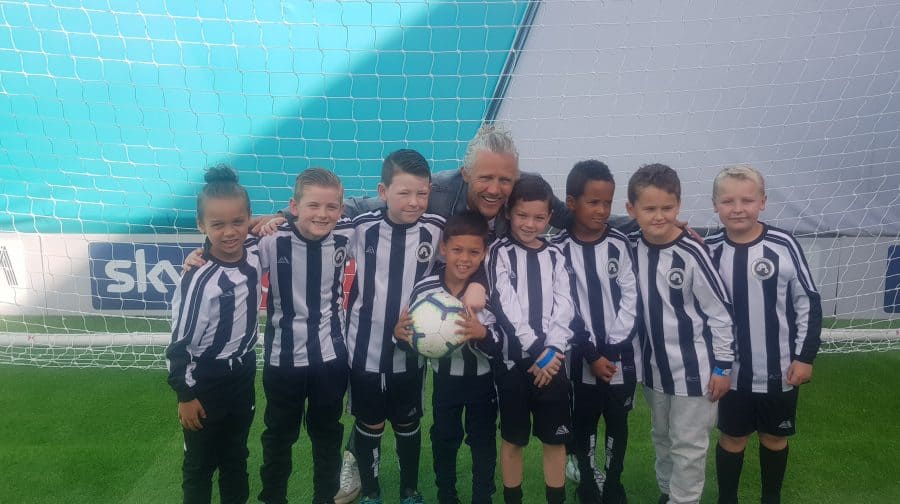 The youth team of Fisher FC made their debut appearance on telly this week, after appearing on Sky Sports’ flagship show, Soccer AM.

The youth team members, a mix of under-eights and under-nines, made their appearance on the show on Saturday after player AJ sent in a video of him ‘nutmegging’ another player, as the stars on the show do.

The video couldn’t be shown on telly because of the players’ ages but crew on the show invited the footie fanatic and his team mates to be in the audience of the show – and even take turns scoring past the show’s host, Jimmy Bullard.

Donna Powell, who is the physio for the Fisher youth’s firsts team as well as under-eight’s player AJ’s mum, said: “AJ sent in a video which they call nutmegs – he nutmegged someone, but he was too young for it to go on the screen, on telly.

“So they asked if him and his team wanted to be in the audience and come do top bins, and AJ got top bins.”

The game involves making volley shots in the top corner of the Soccer AM goal, making it impossible for the keeper to catch.

The Bermondsey resident added: “They did really well, taking shots and scoring past Jimmy Bullard!

“He was fantastic, and the crew members were fantastic with the team as well.

“All the children really enjoyed it, being in their kits and being on telly.”

“They were buzzing all day, even from six o’clock in the day. Especially to meet and have photos with the crew and Jimmy!”

The eight players appeared on the show on Saturday October 13th at 10am – and their shots past Jimmy and the Soccer AM crew can be caught on catch-up television.