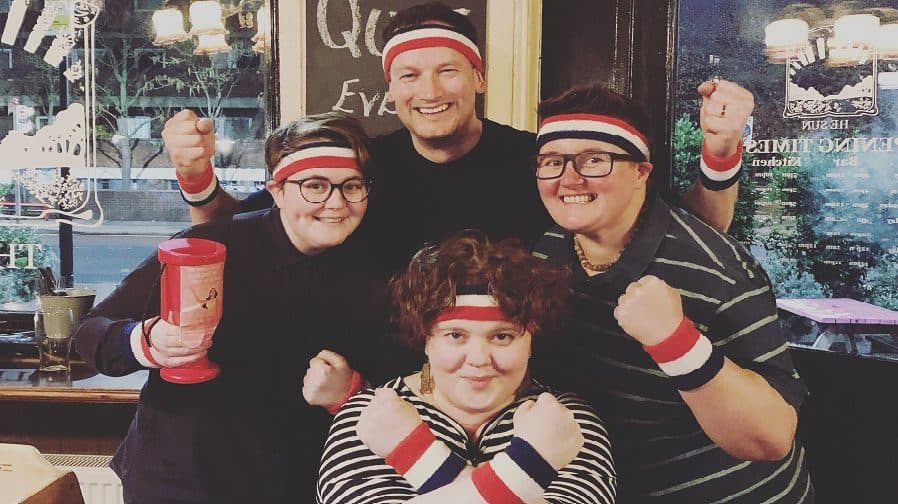 A bunch of pub quiz superstars have held a ‘marathon pub quiz crawl’ across south London to raise money for the homeless this winter.

Pocahontas Fan Club – formed of Jenn, Sigga, Katie , Nick, Claire, Michael and Fabrice – is a regular at the Old Nun’s Head weekly quiz, but this week the team has been competing in a different pub every day to to raise cash for the Robes Project.

Team member Sigga Reynisdottir told the News: “For ages we’ve been talking about doing a pub quiz marathon and this year we finally decided to do it, and to try to raise money for charity at the same time, so #FiveDaysOfQuizmas was born – because quizzes and puns go hand in hand!

“We picked the Robes Project because it focuses on the homeless in south London where we all live, and we picked the five different pubs from the areas we live in.”

At their first outing at Honor Oak’s The Chandos the team came in second, before winning the next day at the Commercial in Herne Hill’s station square.

Night three at the Trinity Arms in Brixton saw a less spectacular performance with the quizzers coming in at fifth place, but happily their fundraising is still going strong with nearly £400 bagged already.

Last night the team appeared at The Sun in Camberwell achieving a more than respectable third.

The team – described by themselves as ‘one painfully average pub quiz team’ –  are now hoping they can reach the £500 mark, and help provide more beds for rough sleepers this Christmas.

Tonight they will return to home turf at the Old Nun’s Head for their finale – and last night of fundraising.

Quiz regulars The Pocahontas Fan Club are on a charity pub quiz crawl to raise money for the Robes Project.
Tonight will be their 5th quiz in as many nights.
You don't need to let them win tonight, but all donations will be gratefully received.
Shout now to book your table. pic.twitter.com/NrfWWmMb2s

To show your support visit: justgiving.com/fundraising/fivedaysofquizmas