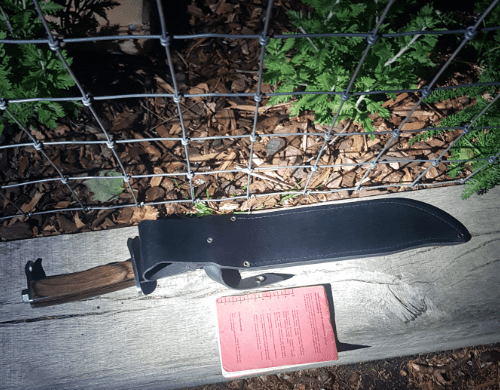 One of the recovered knives

Five teenage boys have been arrested after a pizza delivery driver had his moped stolen at gunpoint in Bermondsey’s Marden Square, off Drummond Road, police told the News.

Officers said the delivery driver was held up at 1am on Monday, April 29 as he finished a job.

When he walked back to his moped it is said he was confronted by five youths.

He told the Met’s specialist firearms command they threatened him with what appeared to be a handgun and ordered him to hand over the keys, before fleeing the scene.

Forty minutes’ later, while interviewing the victim, officers were called to Peckham’s Leyton Square, to reports of  five men on mopeds causing a disturbance.

Police said four of the suspects crashed as they attempted to make a getaway and were arrested.

The fifth was arrested in a nearby park soon after, but no firearm has been found.

Police recovered the victim’s moped along with four others, including two that had been stolen in earlier robberies.

They also seized a machete, zombie knife and several balaclavas from the scene.

All five teenage boys were arrested on suspicion of robbery.