“A lady with blond hair… fell on the floor very close to me.... It may have been the Canadian woman who was killed" 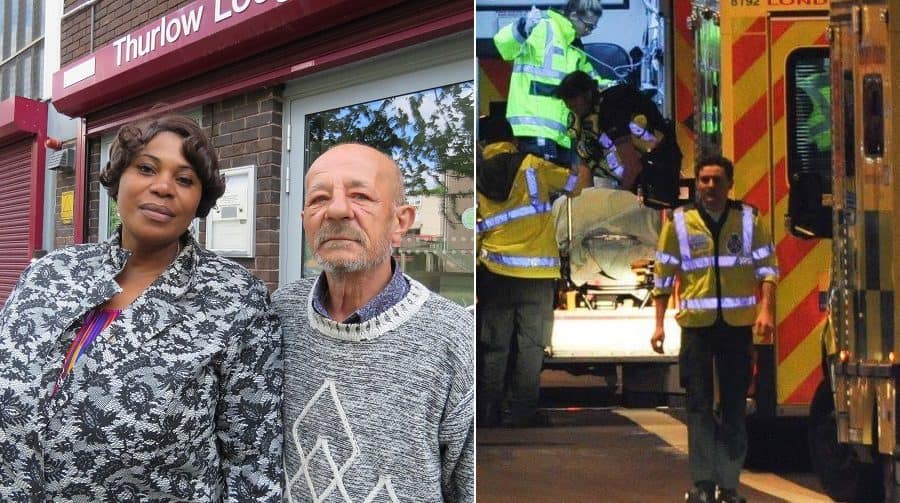 An Aylesbury Estate foodbank manager has told how she saw the terrorists’ white van mow down pedestrians on London Bridge on Saturday night.

Sister Catherine Msoni, 48, was waiting for a bus outside Southwark Cathedral at 9.45pm that night, when the white van came speeding over the bridge.

Sr Catherine told the News that among the people hit by the van – as it “zigzagged” from left to right – was a young blond woman, who she believed was 30-year-old Christine Archibald, named on Monday as one of the deceased.

“There was this white van that came from the other side, really speeding,” Sr Catherine said.

“I heard people screaming, so I looked up and suddenly on the left the white van was running through people.

“I thought ‘oh my God, he has lost control’ and I started screaming. But he was actually rushing to hit into people. Then I realised.”

She said: “a lady with blond hair… fell on the floor very close to me. I saw her get hit at the end of the bridge by the traffic lights by the Cathedral.

“The woman was lying there, she was not moving and not breathing. I remember telling the police ‘I don’t think she’s breathing’.”

Having seen news reports that Canadian Ms Archibold was the first to be named among the terrorists’ victims, she said: “I think she might be the one, yes… People were trying to resuscitate her – this lovely blond girl. She looked quite young, maybe in her twenties or thirties.”

Further down the road towards Borough High Street “you could see people on the ground. No movement. It was a very sad site.”

She saw the van swerve off and “hit into a pole by the Cathedral”.

Christine Archibald, the first victim to be named

“And I think [the attackers] came out and started chasing people into the market,” she said.

“I didn’t actually see the three men. But I did see one guy who was just running in the high road. He started running. He looked like an Asian guy in a white t-shirt.

“I grabbed my phone and I rang the police… I was crying and screaming.

“The police asked me what was happening and I saw ‘oh my God there’s this crazy guy with a white van just running into people’.

Sr Catherine said a single ambulance was the first to arrive on the scene, and armed police and CID came in eight minutes. They were “coming from everywhere”, and were yelling at people to “run and take cover”.

“We heard a noise like a ‘bom bom bom’,” she said. “I didn’t know if it was gunshots. It was very disturbing, very confusing.

“There was a lot of police. It was hard for me to tell, but there were so many police. They were running towards the scene and then others were encouraging us to run away.”

She fell on her knee as she was trying to run, but was helped to her feet by a homeless man who regularly visits Sr Catherine’s Divine Rescue foodbank in Thurlow Street, and had accompanied her to the Cathedral that night.

Together they kept running to the north side of the bridge, towards Monument.

Once at a safe distance, they boarded a bus towards Aldgate.

“We just went and sat inside the bus. We were just scared and nervous and everyone was looking at each other because you don’t know who is who. Everything happened so fast.”

When she at last returned to her home in Ilford, at about 2:30am, she was there alone.

“It was just me by myself. I phoned my friends and family to let them know what happened,” She said.

“I hardly slept to be honest, because I was watching what was happening until 5 or 6am until I dozed off.

“Later in the day the police called me and I said I couldn’t talk to them because I needed to sleep. I didn’t know what to say. It’s very disturbing, even just to start the story. It’s very hard.”

As the manager of the Divine Rescue foodbank, located at the Thurlow Lodge Community Hall, Sr Catherine knew she had dozens of homeless people who needed her help.

“I didn’t come to work yesterday because I was in shock, so the others opened up and served breakfast. We had 80 people come here for food.”

But by Monday, having still felt like the shock had “not yet hit me” Sr Catherine was back at the foodbank and helping her clients, despite saying she was “still having flashbacks”.

“It makes you realise your time on earth is not permanent and it makes you appreciate your life that much more. I have just been praying. Praying and praying to make me feel better.”

Most of all, she was keen to praise the homeless man who helped her to her feet after she fell to the ground whilst trying to flee across the bridge – Zbigniew Mikolaj Niejadlik, who is from Poland, and cannot speak English.

“My homeless friend was exceptionally kind. But [asking for] help is not [in] his language, he just acts kindly.

“I wish someone could give him a home.”