'The work that Dulwich Hamlet have done to support the LGBTIQ+ community in football has been outstanding. They are fantastic allies' 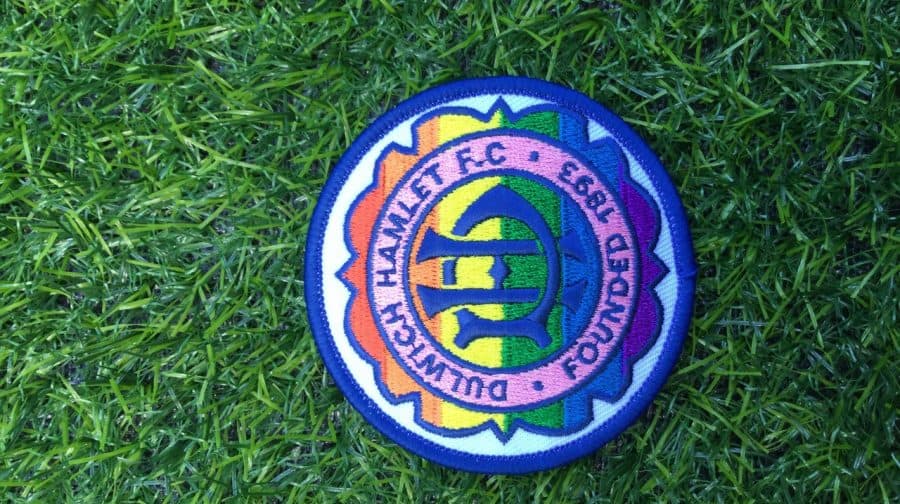 Taking place on Saturday, July 25, the festival brought together LGBTQI+ people and their allies to celebrate inclusion in the game and work together to tackle homophobia in sport.

The virtual event included a range of speakers including academics, coaches, and fans streaming their conversations throughout the day from their living rooms.

There was over fifty hours of content, including panel discussions, quizzes, and even a Pride themed revival of Championship Manager: Season 01/02.

The Hamlet speakers explained how they have built an inclusive atmosphere at the club, why it’s such a priority, and how to go about convincing other clubs to do the same.

In recent seasons, the club – renowned for its social justice activism – has produced rainbow Dulwich Hamlet scarves and various other pride-inspired accessories, as well as contributing to anti-homophobia charities.

Lou Englefield, one of the organisers of Football Pride, said: “The work that Dulwich Hamlet have done to support the LGBTIQ+ community in football has been outstanding. They are fantastic allies”.

She added: “Football has been, and still can be, a hostile place.  When I first started working in football (in 2006), there were no LGBTQI+ fan groups – there was no visibility for these people in the game.

“The hardest thing was convincing people that the LGBTQI+ community exists in football – because they’re invisible.

“People thought homophobia in football was a victimless crime; in that if someone was hurling homophobic abuse at a player, everyone assumed there’s no gay people in football, so it didn’t matter”.

She acknowledged there has been “massive growth” in support for the LGBTQI+ community in the game, but insisted events like this are needed to keep that support going.

Lou’s campaign, ‘Football v Homophobia’, works all year round in football academies and primary schools educating children on the topic. She said the Football Pride festival was a way of celebrating that work. Gary Ginnaw is the Player-Manager of Charlton Invicta FC – an ‘LGBT-inclusive’ team affiliated to Charlton Athletic. He also helped organise the festival. Gary described how the fear of homophobia has affected his life.

“I struggled when I was younger, my school life wasn’t the best. I went through secondary school trying to be unnoticed, hoping nobody would ask if I’m gay,” he said.

“As a child I was playing football for hours every day but I stopped playing from the age of eighteen to 31 because I didn’t think being gay and football could work.

“I was worried about being outed, awkward situations in the changing rooms and social events…

“In my private life, I was worried about going to family parties in case someone tried to set me up with a girl. I hated going to social events just in case I got forced into a position I didn’t want to be in.

“Even now, I still worry internally that people might judge me – it’s like my own demon I have to deal with.

“If there were groups like this fifteen  to 20 years ago, telling people it’s ok to be LGBT and still play football – I know that would have made a massive difference to my life.

“I don’t want young people to avoid doing something they love like I did just because they’re afraid of what people might think of them”.

There are currently no openly gay professional footballers in England, from a pool of roughly four thousand players.  The only openly gay footballer ever to play in the Premier League is the German midfielder Thomas Hitzlsperger, although he only came out after he retired.

Justin Fashanu was the first professional footballer in England to come out as gay when he did so in 1990 (the Premier League began in 1992). A week later, his brother, John, publicly called him an ‘outcast’.

In March 1998, Justin Fashanu was questioned by police in the USA when a seventeen-year-old boy accused him of sexual assault. He was found hanged on May 3, 1998.

According to his suicide note, he feared he would not get a fair trial because of his homosexuality, and he did not want to give more embarrassment to his friends and family. His note stated the sex was consensual.

Significant strides have been made to tackle homophobia in the game. In 2007, homophobic chanting at football grounds was explicitly outlawed by the Football Association.

The LGBT rights charity, Stonewall, runs a ‘Rainbow Laces’ campaign every year during which players wear rainbow coloured laces for two weeks of the season to send a message of inclusivity to the LGBTQI+ community.

This has received buy-in from all the Premier League clubs. Stonewall FC, Britain’s first gay football team, was founded in 1991 and played Dulwich Hamlet in a friendly in 2015.

But despite this progress, just weeks ago a Premier League footballer wrote an anonymous letter to the press saying he is too afraid to reveal his sexuality for fear of discrimination.