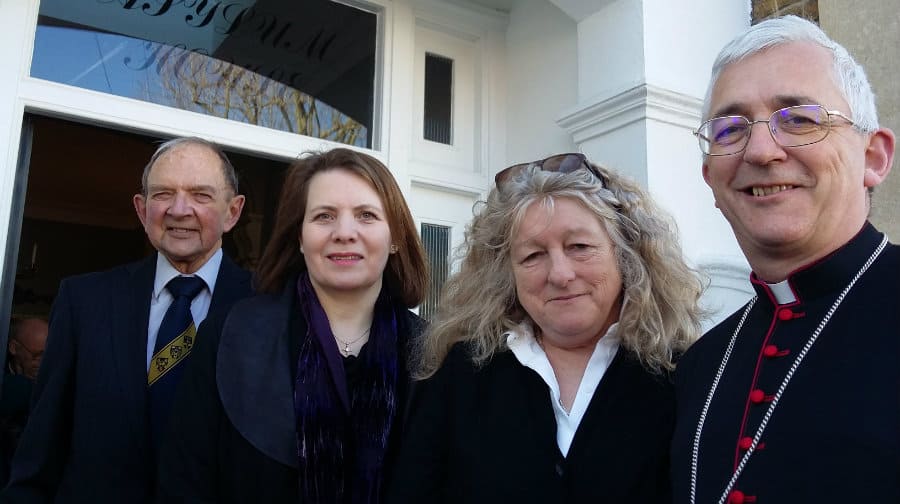 The life of a former bishop of Woolwich has been commemorated with a Peckham Society Blue Plaque at his old home – which now belongs to Oscar-winner Jenny Beavan.

The plaque honours David Sheppard, who was also a passionate campaigner for civil rights and poverty relief, and was captain of the England cricket team.

It was unveiled on Monday at Ms Beavan’s house, the house where the reverend lived with his wife and daughter from 1969 and 1975.

Ms Beavan, who hosted the unveiling ceremony, earned both an Oscar and a BAFTA this year for her work on as costume designer for the Mad Max, Fury Road film.

She told the News: “I knew about David living here when I moved in, so I went to Southwark Cathedral one day and they had a book called Steps Along Hope Street which has a photo of this house in it.

“He sounded like the most wonderful man and I feel incredibly proud to have this place. It feels pretty cool to have the modern past recognised on the front of my house.”

“I grew up here while my dad was bishop,” she said. “But I also came back to live here while I was studying for my second year at Goldsmiths University.

“So I basically ended up lodging in my old bedroom. Jenny has the piano and her desk in exactly the same place we used to, only her desk has BAFTAs and Oscars on it.”

The Rt Rev Sheppard left Peckham in 1975 and was made Bishop of Liverpool that same year, and he remains the only ordained minister to ever play Test Cricket.

He died on March 5, 2005, the day before his 76th birthday, having announced in 2003 he was suffering from colorectal cancer.

His plaque was the third the Peckham Society have had made. The first was in 2012 to commemorate W H Blanche, the former overseer of Camberwell Vestry for the poor, while the second was for lithographer and factory owner William Griggs.

Peckham Society chair, Peter Frost, 80, said: “We all agreed David was worthy of being the next Peckham man to get a plaque.

“He also wrote a book called Faith in the City. He strongly believed that church leaders had a duty to live among their own communities to understand them properly.