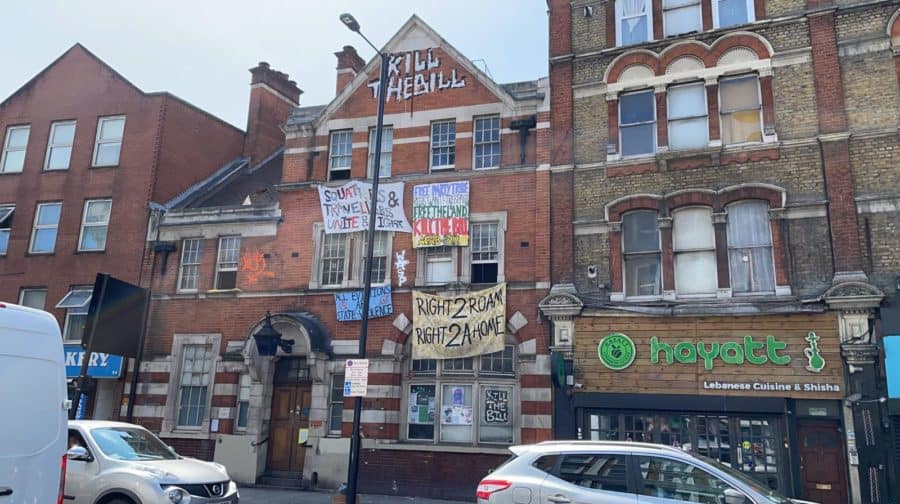 Camberwell’s former police station was taken over by squatters last week in protest at the ‘draconian’ new police, crime, sentencing and courts bill. 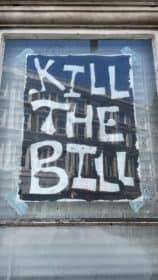 A ‘Kill the Bill’ sign in the window of the building. (c) Leo Schick

A statement taped to the front door on behalf of a group called ‘The Serious Annoyance’ said they had occupied the empty Camberwell Church Street building in its fight to ‘kill the bill’ and highlight the ‘destructive’ role of the police.

“We know the cops don’t protect us – their resources aren’t focused on catching so-called “criminals”, but on protecting the wealth and power of the capitalist class,” the group said, adding “we do not and we will not accept increased police powers which effectively ban protest and criminalise trespass, something which amounts to the ethnic cleansing of the Gypsy Roma and Travelling community in the UK by making a travelling life impossible.

“Despite the increasingly violent and extreme attacks from the state against those of us who resist the growing police state, from the brutal eviction of the Clapham NotACopShop to the harassment of our comrades in Bristol and the vicious prison sentences being proposed for the brave militants allegedly involved in the Bristol Riots, we will continue to fight against the Bill and its criminalisation of trespass and our democratic rights.”

The building has been adorned with protest banners calling for ‘squatters and travellers to unite and fight’, and arguing that ‘all evictions are state violence’.

Thousands have joined ‘kill the bill’ protests across the country and opposition to the sweeping legislation has come from across the political spectrum, with former Labour home secretary David Blunkett warning the new powers would turn the UK into a country more akin to ‘Putin’s Russia’ and create a ‘lasting and toxic’ legacy.

Along with huge changes to sentencing, the bill would give police extra powers to curb peaceful protests.

One resident, who lives near the building, said there was a ‘strong smell of rubbish, human waste and weed’ coming from the building.

Now privately owned after being sold off, it had been monitored by a security team who appear to have been easily evaded by the group. The building was decommissioned in 2019 after budget cuts and soon after a restructure that merged Southwark and Lambeth policing teams into a new ‘Basic Command Unit’.

Although its front counter had been closed since 2013, the building had been still used as a base by officers and for drop-in community policing events and outreach work.

Neighbourhood inspector Tom Cornish told the News: “Local police are aware of squatters in the former Camberwell Police Station and have visited the site recently. The building no longer belongs to the Metropolitan Police Service and the current private sector owners are taking the necessary legal action to eject those who are occupying the building.

“The local policing team is responding to reports of an increase in antisocial behaviour in the surrounding area which is claimed to be linked to the occupation of the building. Please contact your local police team if you have any concerns, via 101 or the Metropolitan Police Service website www.met.police.uk using the “Find Your Area” link.” 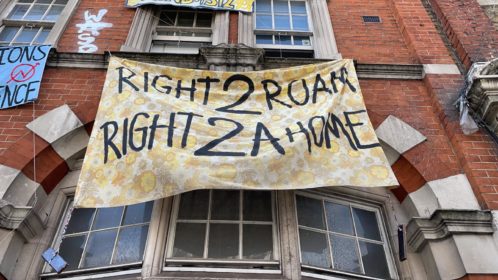 A ‘right to roam and right to a home’ banner. (c) Leo Schick

These trespassers are anarchists trying to disguise themselves as protesters. Just board the place up so they can’t get out.