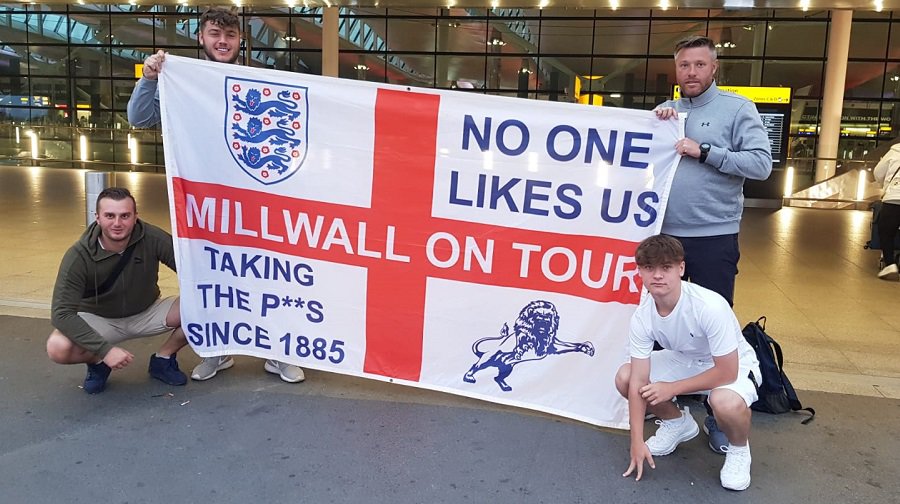 Left to right: Sam, Caley, Dillon and Gary before flying out to Moscow.

GARY ALEXANDER has extra reason to hope England defeat Croatia tonight – he’ll be flying back to Moscow for the final by private jet.

Former Millwall striker Gary flew out to Moscow from Heathrow this morning, with brothers Caley (18) and Dillon (15) Pratt and their brother-in-law Sam Emin (25).

Caley and Dillon are sons of Southwark Metals owner Tom Pratt, who splashed out on flights and £900 a ticket for the quartet to attend the World Cup semi-final at the Luzhniki Stadium.

After the tie, the four Millwall fans get a 4am flight to Frankfurt and from there return to London.

Bermondsey businessman Tom has a private jet provisionally booked for fifteen people including the group to fly back for the final on Sunday – if, of course, Gareth Southgate’s men defeat the Croats later.

“One hundred per cent I’ll be on a private jet if there is one for me,” Gary, speaking to the News from Moscow this afternoon, said. “My friends gave me this opportunity and it’s one I just couldn’t turn down.

“I’ve watched England at previous tournaments before and hopefully we’ll all be heading back on Sunday.”

Gary, 38, who scored two goals for Millwall in the 2009 League One play-off final, is currently the manager of Ashford United.

He is a huge admirer of the work Southgate has done with this squad.

“Whatever happens tonight they’ve had a good World Cup and that bodes well for the future,” he said. “He’s changed the way they play, he’s changed the whole culture around the squad.

“You can see how they communicate with fans through social media that they are open, and they really seem to be enjoying themselves.

“I think it’ll be a close game, but I believe we’ll have the legs for them tonight.”

Gary, Caley, Dillon and Sam (pictured above at Heathrow this morning) were on the way to Red Square ahead of the fixture, where they were meeting up with some more Millwall fans, including Lions TV’s Dan Goodwin.

Eighteen-year-old Caley said they decided to try to get tickets for the last-four clash after England’s 2-0 quarter-final win over Sweden.

“My dad arranged the tickets through his friend,” Caley said. “There is a large group of Millwall fans here so we’re on the way to meet some of them now in Red Square.

“I think it’s going to go to extra-time and penalties, and I think England will go through.”