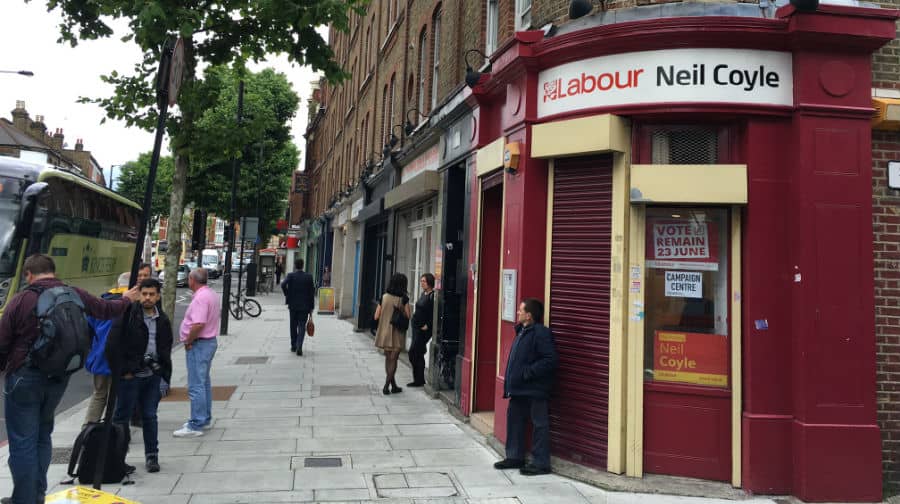 Only four constituents turned up to allegedly protest outside a surgery of Neil Coyle, the Member of Parliament for Bermondsey and Old Southwark, after he expressed worries of a Momentum demonstration.

The small group told the News that they were not members of Momentum, and only wished to talk to MP Neil about his resignation from Labour leader Jeremy Corbyn’s shadow cabinet as residents.

One of the group, Barbra Ulargiu, said: “I feel like he [Neil] is only showing people who agree with him. He’s never asked me about my opinion and he doesn’t listen to others. I think it’s wrong.”

The group were outnumbered by five policeman watching nearby.

Another member, Robin Horsell, said: “What I would like to see is a public meeting so we can all discuss this. If he called a public meeting he could say he then had a mandate. His constituency party have made a point of only tweeting and talking to people they agree with.”

MP Neil previously tweeted: “Police will be outside surgery today due to @johnmcdonnellMP encouraging people to protest. I’m sorry to constituents unnecessarily troubled.”

Police will be outside surgery today due to @johnmcdonnellMP encouraging people to protest. I'm sorry to constituents unnecessarily troubled

He has also accused the Labour shadow chancellor John McDonnell of “encouraging” people to protest outside MP’s offices and that he should be “ashamed” of himself.