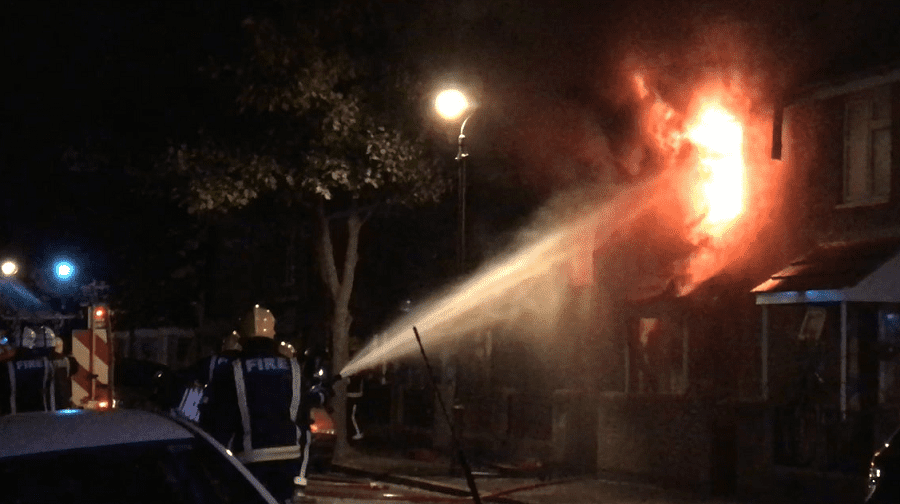 Four people, including a couple in their seventies, were rushed to hospital on Monday morning after a ‘terrifying’ fire ravaged a terraced house in Wingfield Street.

A statement from the London Fire Brigade (LFB) said three people were evacuated from the building via their neighbour’s house and into the back garden.

Police have confirmed that a woman aged 44 was arrested on suspicion of arson with intent to endanger life, after they were called to the scene at 2:45am. She has since been released from custody but remains “under investigation”.

A woman who lived next to the burned-out house told the News: “It was terrifying.

“I could hear the granddaughter screaming ‘get out, get out’. And the son was running around trying to tell people to get out of their houses.

“I looked out of my window and I could see black smoking pouring from theirs.

“I just grabbed my daughter and the dog and ran up the road with no shoes on.”

Police confirmed on Wednesday that the elderly couple were in a “stable condition” but remained in hospital.

The neighbour, who did not want to be named, said: “The lady is very friendly. She would do anything for anyone. She would give you her last crust. And the husband is very fit and swims every day.

“And she goes to church every Sunday. She’s a beautiful, lovely lady.

“I have a daughter with special needs, and the lady would always help me look out for her whilst she’s playing in the garden.”

The neighbour also said she was grateful for how many of her neighbours came out from their homes and offered to take her in, and offered tea and toast to the fire fighters.

The LFB said the fire was extinguished by 4:45am. 35 fire fighters attended from station in Peckham, New Cross, Old Kent Road and Brixton.