RSPCA appeals for information after incident 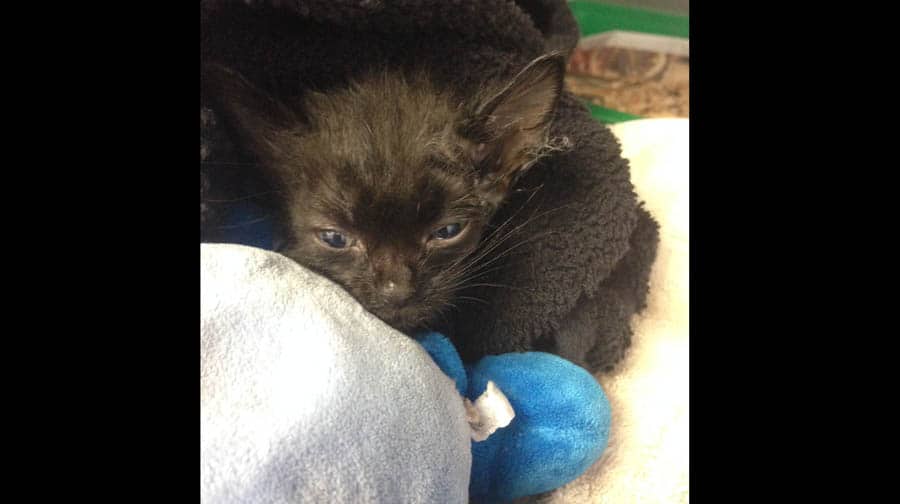 The RSPCA is appealing for information after a tiny kitten was found stuck by its head to a glue trap.

The collapsed four-week-old kitten was found by a member of the public who feared its mouth had been glued shut, in Camberwell on Saturday, July 22.

The concerned finder had used olive oil to try and remove the cat from the trap.

She was taken by RSPCA inspector Nick Wheelhouse to the organisation’s hospital in Putney, where she was found to be extremely hypothermic.

She was bathed in warm solution to remove the remaining glue and to warm her up. As she is so young and suffering from hypothermia, the RSPCA has been guarded about her prognosis.

She has now been named Dobby and moved to the RSPCA brand in Tunbridge Wells, where she will be hand reared.

Inspector Wheelhouse said: “What happened to Dobby is just another example of why we have concerns for the use of glue traps. These cruel traps are indiscriminate and cause unnecessary suffering to animals with everything from snakes, robins, owls and kittens. The public should be made aware of the risk these horrific devices pose to non-target species.

“Sadly, many animals, especially birds, have to be euthanised because the damage done is just too great. It is not a humane trap for any animal as they are not killed outright and have to undergo prolonged periods of distress before they are then found and dispatched.

“Poor little Dobby is just another unnecessary victim of this cruel contraption which causes horrific suffering.”

The RSPCA is now asking the public to report details of any shops selling glue traps to the public. The traps are legal but should only be sold to trained operators, according to industry codes of practice.

The organisation has been running a Wild Animals and Glue Traps project for the past two years, asking people to contact them with details on shops selling traps to members of the public.

The RSPCA will then write to the retailer and ask them to consider stopping the sale of them. If you have any information, please email wildlife@rspca.org.uk