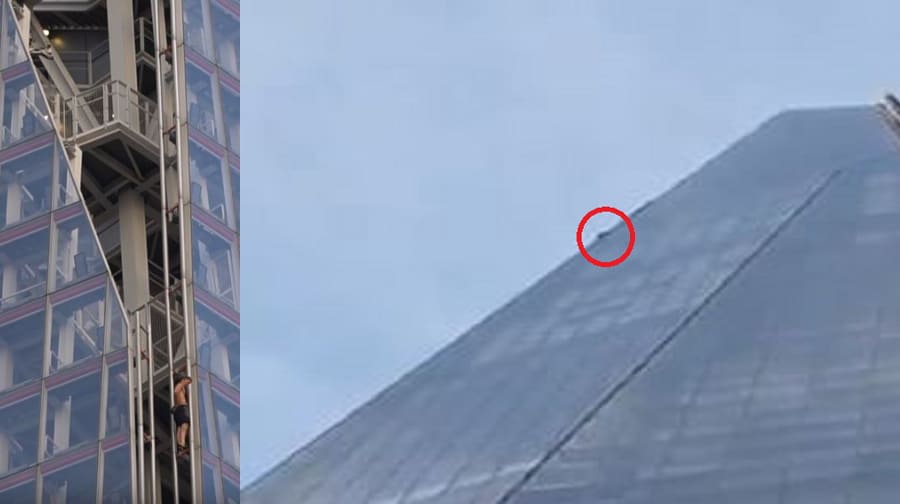 The free-climber who scaled the Shard on Monday morning without ropes has been revealed to be a teenage stuntman.

Nineteen-year-old George King braved the hair-raising feat of climbing the 310m skyscraper at London Bridge at around 5.15am.

Police were called to the urban climber’s stunt, but they did not arrest Mr King.

In a video posted on Tuesday of his climb, he said: “I was thirteen and on a school trip when I first laid eyes on The Shard.

“I felt an immediate passion to climb it – the same type of passion I want the world to feel.”

However, the climber resisted the label ‘daredevil’, adding: “I’ve always found that these names come from those who are ignorant or misunderstood about what I really do and why.

“It takes years of training and careful preparation to be where I am today, and this practice is achievable only because I see myself as someone who has followed a respectable passion, albeit an unusual one.”

He told his followers on social media site Instagram that he had completed the climb in 45 minutes. The climber used suction cups and chalk to aid his ascent.

He added that he apologised to anyone whose commute had been negatively affected by the climb, saying he thanked the authorities “for being considerable [sic]”.

The Met Police said: “Police were called at 05:15hrs on Monday, 8 July following reports of a ‘free-climber’ on the Shard.

“Emergency services attended and the man went inside the building where he was spoken to by officers. He was not arrested.”

The escapade attracted some admirers online, with one telling Mr King: “I look up to people like you because you had a goal and you achieved it by putting your mind and determination into it.”

But Real Estate Management, the company which operates the Shard, were less impressed, telling media: “Fortunately no-one was hurt by this dangerous activity and we will be assisting the police with their investigation.”

The Shard is the UK’s tallest building, and is among the tallest in Europe.