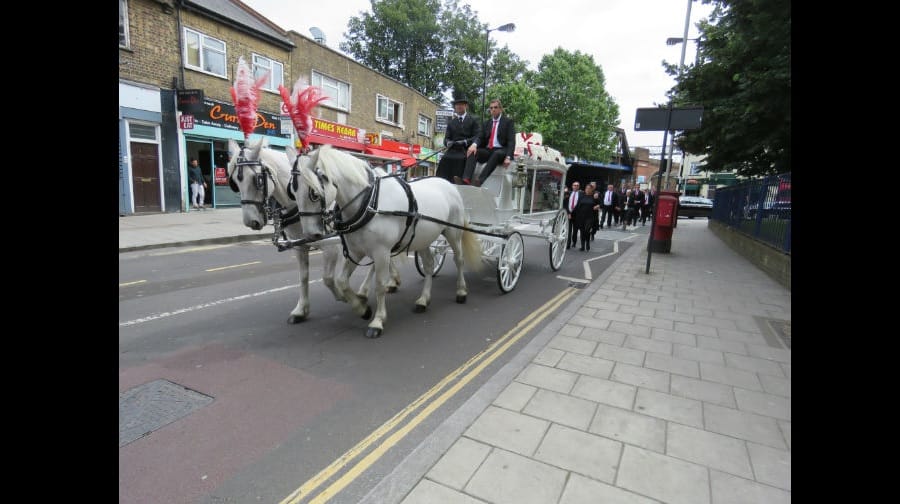 Dozens of close friends and family came to the Blue in Bermondsey on Friday, July 15, to put to rest young Bermondsey dad, Jack Wells.

The community saw tens of cars and a horse drawn carriage come down the high street on their way to Honor Oak crematorium.

Jack, 23, lost his battle with cancer on June 27 under the care of St Christopher’s Hospice, Sydenham.

He spent his last months fundraising to make memories with his three-year-old daughter Scarlett, but passed away before fulfilling them all.

Jack was diagnosed with Ewing’s sarcoma, a rare bone disease, at the start of 2015 after finding a lump on his shoulder.

Jack’s dad, Charles, paid tribute to him at the well-attended service, saying how his two loves were Scarlett and cars.

He said: “This should be the other way around. Jack was a father, a son, a brother, nephew, cousin and friend. He was born in Camberwell and moved to Bermondsey, where he became a true Bermondsey boy.

“His true love was Scarlett. Everyone warmed to him and we all loved him in our own special way. He always kept his sense of humour and I once said to him that he could be stubborn now that he’s ill, and he replied ‘like father like son’.

“His second love was his cars. He took after his granddad when looking after his cars. He didn’t want to take his mates to the seaside once because of the mess they would have made! Jack lived his life with enjoyment. I am sure we will always have  memories of Jack. Jack, you will be loved for eternity and will never be forgotten.”

Jack’s stepdad, George White, said: “He was always cheeky and a mummy’s boy. He was kind and caring and very lovable. Jack was a wonderful father, who did everything he could for Scarlett.

“Jack loved life and he lived life to the full. Even when he was diagnosed he took it in his stride. He would still spend time with Scarlett and the rest of the family. A broken heart never ends but I will always have loving memories of him.”

Veronica, Jack’s mum, said: “I would like to thank everyone who came to Jack’s funeral and the flower contributions that were made. Thank you to Jack’s dad, Charles Wells, for his speech and also his uncle, Ian, and stepdad George for reading my speech for me, and Gary Valentine-Fuller for his very moving poem.

“Thank you Brian Croll and Ronni for all their auctions they are doing for me and Scarlett, and to Karen Supple’s son, Liam, for doing the race for life in honour of my son Jack, and to all the people who raised money for Scarlett.

“And a big thank you for Valentine & Turner for the lovely service and making my son’s day special, and one last thank you to the MumMum foundation and Southwark News for everything they have done for us.”