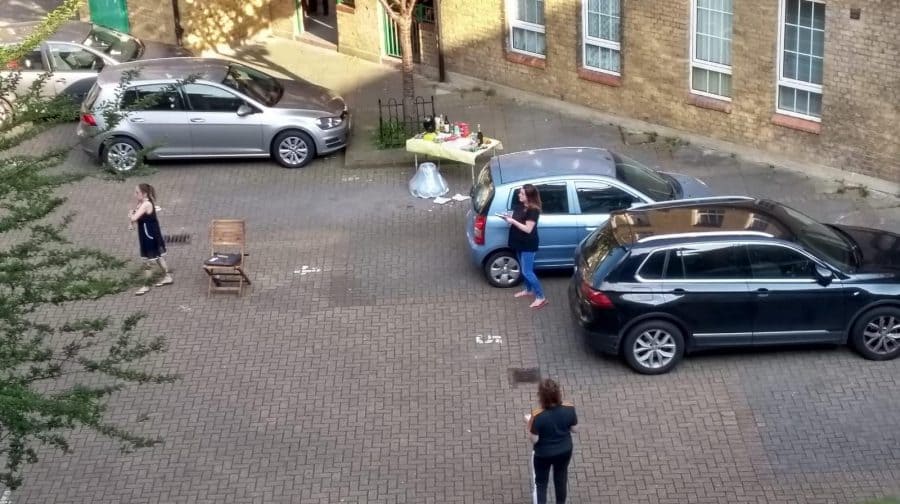 A Rotherhithe estate has found a novel way to break the lockdown boredom – by playing socially distant bingo.

Residents of the Swan Estate behind the Brunel Pub took to their landings on Sunday afternoon to play the game, with a bingo caller standing in the square’s centre to shout out the numbers.

It was the brainchild of resident Wendy Roberts, 43, who told the News she came up with the concept to make sure people in her close-knit community weren’t feeling lonely.

“I wasn’t sure how it was going to go,” she said. “But it was about fifteen families in the end. We’re going to do it next Sunday as well.

“We’ve got quite a nice little community, everyone looks out for each other, we’re quite close knit.”

Wendy, who has lived on the estate for 25 years, gave each household a book to play with which she had left over from another game.

Along with her friend, Lisa O’Mara, Wendy set up a table in the middle of the estate for people to collect prizes after winning their games for the ‘Bingo Boredom Buster’.

Another resident was also on hand to relay the numbers further down the estate to make sure everyone could play along. Residents playing the bingo on their balconies

Prizes included tree cuttings, books, chocolate and household items, said Wendy. And it’s not the only thing residents of this estate have been doing during the lockdown either.

One tenant, who is in her eighties says Wendy, has even been coming onto her landing to sing Vera Lynn’s ‘We’ll Meet Again’ every Thursday after the regular clap for the NHS.

“She sings Vera Lynne and stuff like that,” she says.

The bingo is set to be a regular fixture on the estate for as long as the lockdown lasts. “It whiles away an hour!” says Wendy.