A flat has been completely destroyed 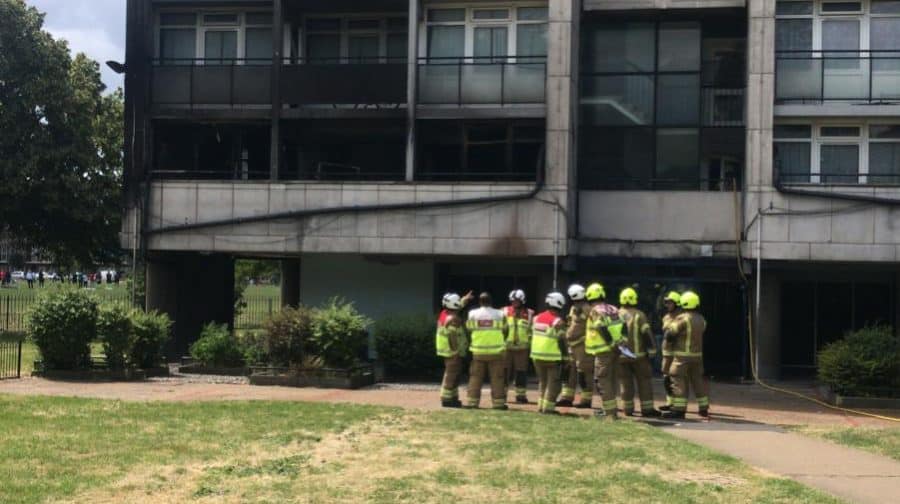 Fundraisers have been set up to support families affected by a tower block fire in Camberwell’s Brandon Estate as the London Fire Brigade say a cigarette thrown from above is the most likely cause. Two fundraising pages have been set up – one by TRA chair Tom Lloyd for the household whose home has been destroyed, and another by Amanda Srivastava on behalf of community organisation Us Group, which has members based on the estate.

“We know that there  will be many families affected by the damage and unable to replace basic essentials,” she explained.

“During this pandemic life is difficult for many of us – which is why it’s so important that we come together to support the local community who are now facing even more hardship due to this fire.”

Around 100 people evacuated their homes on Otto Street on the afternoon of Saturday, June 27, after a serious blaze in a first floor flat.

There are no reports of any injuries, but the whole flat in the estate’s Walters House was completely damaged.

Sixty firefighters rushed to the scene, which caused scenes of thick black smoke to be seen from the surrounding area.

Thirteen adults and five children were treated at the scene by paramedics as a precaution.

The brigade took sixty 999 calls about the fire in the early stages, before it was brought under control at around 1.17pm.

Firefighters are warning smokers to discard cigarettes carefully after a cigarette started this fire, which damaged a first floor flat in #Kennington. If you see a fire, call 999 before you film and move well away from the scene https://t.co/FTjDn3I4ZA © @crazystylez2 pic.twitter.com/fqvLvzyKk3

Firefighters now believe a cigarette thrown from a floor above is the most likely cause, after coming into contact with material stored on the balcony which quickly set alight.

The brigade has appealed for residents to always stub cigarettes out properly, dispose of them carefully and make sure smoking materials are cold before emptying ashtrays – preferably wetting stubs before they are binned.