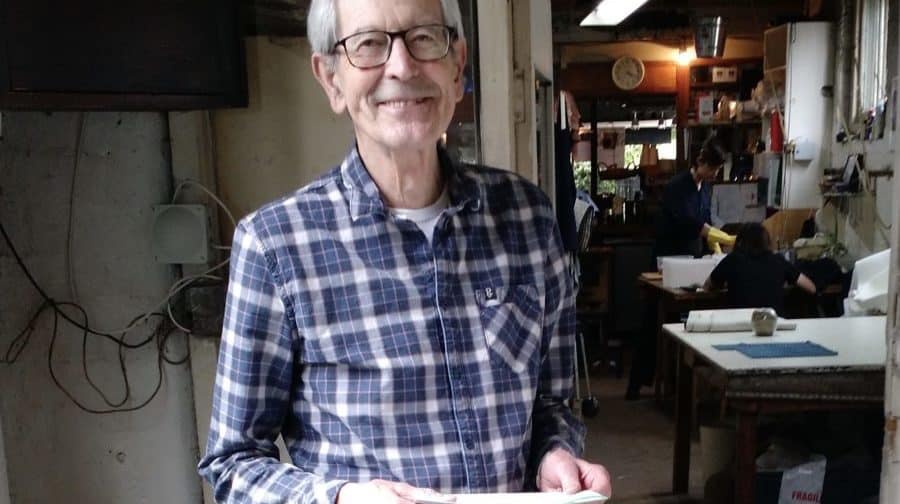 A funeral will be held next week for master upholsterer Bob Fowlds, whose family have traded in Camberwell for over 140 years.

Robert Fowlds, known as Bob, managed the family business A.V. Fowlds & Sons Ltd, based in Camberwell’s Addington Square.  He died on his birthday, on February 19, at the age of 73.

A funeral will be held at Beckenham Crematorium on Tuesday, March 24, at 11am.  His sister, Barbara, has told the News a planned memorial at Fowlds café in Camberwell, in Bob’s workshop, is now postponed until after the Coronavirus pandemic.  The News will update readers when more information is available.

Flowers or donations in memory can be sent to Francis Chappell & Sons in Glebe Way, West Wickham, BR4 0RJ. Cheques should be made payable to the Lung Cancer Foundation.

The upholstery company was founded by Bob’s great-grandfather, James Fowlds (1849-1915), one of fourteen children who became a master chair maker by the age of 21.

After the war, Albert Victor Fowlds (1889-1969) took over manufacturing and moved the business to Addington Square in Camberwell in 1926 – where it has stayed since.  In 2014 the premises also became home to Fowlds Café, which occupies the former shopfront.  Although the company originally made furniture from scratch, in recent years had focused on reupholstery.

Bob was a fourth generation upholsterer and started working in the Camberwell factory as an apprentice in 1964, at the age of seventeen, and continued working his craft until the beginning of this year.

The company has a roster of important clients – from the Houses of Parliament to TV shows like The One Show and Big Brother.  In a nod to cult film Withnail and I, the cafe serves a ‘Camberwell Carrot’ cake.

Bob’s family described him as proud of the family history, and having a sense of responsibility for keeping it going into the 21st Century.  He was also known for taking on complex commissions other people turned down; believing the task too difficult.

His sister told the News: “Bob came across people from all walks of life during his career, and he treated everyone the same.  Whether they were from the House of Commons, Westminster Abbey, ambassadors, the doctor in charge of the World Cup football team, or a humble local resident, Bob was always himself, and the factory door was always open for business.” The late Bob Fowlds with his father, Albert Frederick Fowlds, who passed away in 2008.