Parents claim that they had to queue for hours in a hot, overcrowded room where a lot of what was advertised was missing 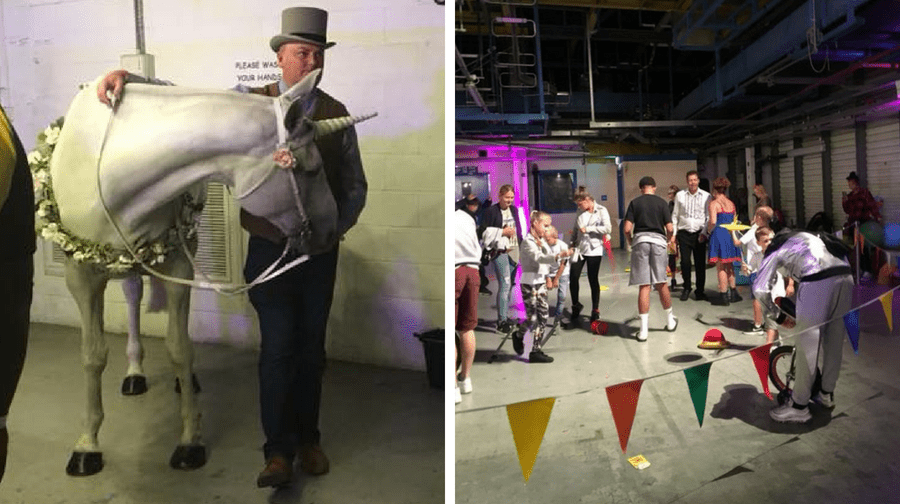 Inside Monstrous Festival at Printworks in Rotherhithe (Lynsey Mitchell)

Scores of furious parents are demanding their money back after what they thought would be a “premium children’s festival” turned out to be more like “a really bad school fair”.

Some families travelled from miles around and saved up for months to pay for tickets to the Monstrous Festival held at Printworks in Rotherhithe on Sunday.

The event organisers promised to turn the venue into seven fantasy worlds for a day, including a ‘unicorn land’, The Beast – ‘the biggest inflatable zone in the world’ – and a gaming area.

But parents claim that in reality they found themselves queuing for hours in a hot, overcrowded room with a lot of what was advertised missing – including a horse dressed up as a ‘unicorn’ which had to be taken away because it was scared of the noise and lights. Jonathan Forsyth, 42, who travelled from Lewisham with his wife, seven-year-old son and baby daughter, told the News the feeling was “such disappointment because we built it up for our children that it was going to be such a good day”.

“It was sold as this really premium kids’ festival and when we got there it was in this place where they normally have raves and everything was terrible,” said the analyst, who paid £120 for tickets.

“There was meant to be a circus but there was just a cordoned off area and the soccer school turned out to be just queuing up for ages to do a penalty shootout without a goalkeeper.

“People were trying to make the most of it but everyone just looked a bit bewildered.

“It was all just very unruly, overly hot, overly loud, queuing up for something and finally getting to the end of the queue to find it was absolutely rubbish. It was a joke basically.”

Lynsey Mitchell, who travelled to London from Berkshire for the day with her husband Tim, daughter Shannon, seventeen, and son Arlo, eight, paid £100 for tickets.

“When we walked in we laughed, like a nervous laugh, because it’s like you’re expecting someone to jump out with cameras,” said the 38 year old, who ended up leaving with her family and spending the day at St James’ Park instead. “The ‘beach’ was two inflatable toys and it was all stone cold floors, no sand and no air conditioning.

“There were three pens which were your ‘roaming farm’ and you queued to decorate these cakes but the kids weren’t even allowed to put their own icing on, that’s what they waited an hour for. It was like a really bad school fair.”

Another mum-of-two paid £100 for tickets. “When we got our wristbands and walked in literally within ten seconds I was like ‘oh my goodness, what have they done’,” she told the News.

“You could just see there were these little pens with activities but to have next to no backdrops, nothing to change the world you were in, they hadn’t made any effort to make it special and there were just concrete walls.

“That’s how much you pay for a lot of the theme parks and there were all these promises of fairground rides when I booked the tickets back in February.” Picture inside Monstrous Festival at Printworks, in Rotherhithe (Lynsey Mitchell)

The event organisers apologised for “major issues” with queuing and admitted the 900ft inflatable obstacle course had to be split into two sections to fit inside the venue.

A spokesperson for Monstrous Festival told the News: “This was our first year and whilst we worked hard to ensure the festival was successfully delivered, we did unfortunately have some major issues regarding queuing. For that we are sincerely sorry.

“After much deliberation we decided to split our giant inflatable into two sections across two floors to ensure the activity had a sufficient amount of room.

“We are collating all feedback and currently in the process of ensuring that all our guests’ concerns are addressed as swiftly as possible.”