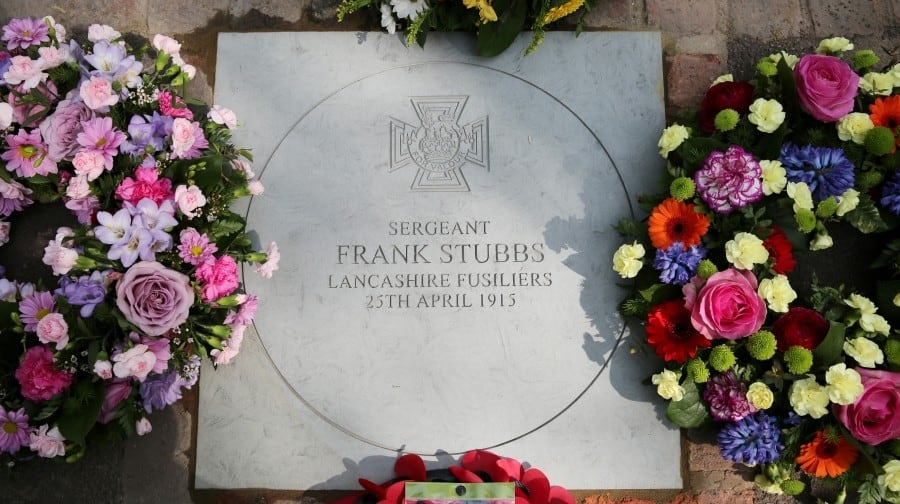 A Walworth war hero was honoured last week as a paving stone bearing his name was laid near his birthplace.

The plaque commemorates 100 years since Walworth-born Lance Sergeant Frank Edward Stubbs earned his Victoria Cross (VC) medal with an act of astounding courage on the beaches of Gallipoli.

On April 25, 1915, Stubbs landed just south of Cape Tekke in Turkey on a narrow stretch of beach hemmed in by steep cliffs. Showered with Turkish gunfire from above and with three rows of barbed wire to fight through, it was against all odds that Stubbs helped to capture the Turkish positions.

The memorial stone was unveiled by the Mayor of Southwark, Councillor Sunil Chopra at the entrance to Pasley Park near Chapter Road, where Stubbs was born.

Children from St Paul’s Primary School sang ‘It’s a long way to Tipperary’ at the ceremony on Friday morning where Cllr Chopra said: “One hundred years ago, a soldier of Southwark demonstrated bravery of the highest honour on the opening day of Gallipoli.

“We honour this hero by setting in stone our eternal appreciation for what Sergeant Frank Stubbs risked and sacrificed that we might have this day.”

Stubbs is one of eleven Southwark First World War VC winners to be honoured with a commemorative paving stone 100 years after their medal was awarded.

Mayor of Southwark, Cllr Sunil Chopra lays a wreath at the unveiling of the memorial stone

OUR GREAT UNCLE ,
WHAT AN EXTRAORDINARILY BRAVE MAN YOU WERE !
I MAKE SURE THAT ALL THE CHILDREN OF OUR FAMILY LEARN ABOUT YOU AND YOUR HEROICS !
YOU WILL LIVE ON LONG IN OUR MEMORIES AND OUR HEARTS ,
WE ARE SO PROUD OF YOU !
X
ALL OF THE STUBBS FAMILY