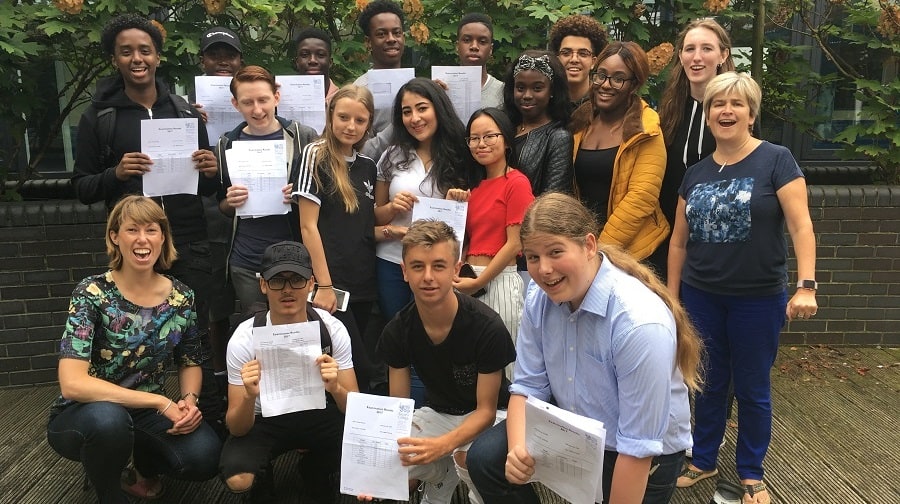 64 per cent of students achieved grade 4 or above in both English and maths – up from 56 per cent last year.

40 per cent of students achieved grade 5 or above in both English and maths – which is the new ‘good pass’ grade awarded for the first time this year.

A number of students achieved grade 9s (the new highest grade) – with six students gaining these hard-won grades in maths and seven in English.

Principal Chris Mallaband said the grades represented a significant improvement for the college and that he was delighted for the students.

He praised the hard work of the students and staff and also the support given by parents and families in the time leading up to the exams.

John Sama passed his GCSEs with flying colours, despite losing his uncle in a car accident earlier this year.

The sixteen-year-old bravely pushed on with his studies without taking any time off school and came away with eleven GCSEs.

“My uncle died in February three days after my birthday in a car accident,” said John.

“That made it hard to concentrate for a week or two but I didn’t miss any school.”

The teenager achieved an 8 in both maths and English literature, a 6 in English language, A*s in PE and RE, As in business studies, biology, physics, and history, a B in chemistry, and a C in French.

He said he was pleased with his grade in French because he didn’t think he would pass since he had struggled with it for the entire two years.

“When I told my mum she started crying on the phone; she wasn’t nervous because she knew I was working hard at home but I think she was just proud,” said John.

“I plan to study maths, physics, economics, and chemistry at A-level and I want to do mechanical engineering in the future.

“My uncle works in mechanical engineering for the military in America and just through my GCSEs I’ve grown into it because I like physics and maths a lot.”

Alaina Zubair passed all of her exams with top grades, including the top grade 9 in English language.

The sixteen-year-old, from Rotherhithe, will also leave Year 11 with an 8 in both English literature and maths, A*s in Urdu, chemistry, physics, geography, art, and RE, and A grades in business studies, biology, and Spanish.

Alaina will go on to study biology, chemistry, maths, and politics at A-level.

“I was so nervous when I opened my results and overwhelmed and at first I thought the 8s were Bs,” she said.

“I always under predict my grades so I didn’t think I would get a 9 in English language.

“I definitely want to go to university and the reason I’ve chosen to study sciences is to keep the option open for medicine but I’m not certain I will go down that route.”

Cyril Amuah achieved the top 9 grade in English literature, a 7 in English language, A*s in business, physics, PE and RE, A grades in biology, geography, and chemistry, and a B in French.

He plans to move on to another school for sixth form to study A-levels in chemistry, physics, maths, and economics.

“I would like to go to university if I get the A-levels to do a degree in actuarial science which is for someone who sorts out a company’s insurance and looks after or guides them on their insurance risks,” said the sixteen-year-old, who lives in Bermondsey.

Simon Canniffe was one of only a handful of students at the school to achieve the top 9 grade in maths.

The student, who lives in Deptford, also got a 5 in both English exams, an A* in biology, As in business studies, chemistry, physics, history, and Spanish, a B in food technology, and a C in RE.

“I’m going to do A-levels here [at Bacon’s College] in maths, chemistry, physics, and economics, and then after that I’m going to go to uni probably to do something with science,” he said.

Simon, who lives in Deptford, said he found the new exams hard to revise for because he would usually look at past papers but didn’t have any since he was part of the first cohort to sit them.

Katie Downing believes she was the only person at Bacon’s College to achieve a 9 in both English literature and English language.

She also left Year 11 with a 5 in maths, A*s in art, graphics, and RE, an A in geography, and Bs in biology, chemistry, physics, and French.

“I was really worried about maths because it is not my strong suit but when I opened the envelope it was like I had been hit by a train because I wasn’t expecting to achieve so well,” she said.

“The two 9s in English blew me away because when I spoke to one of the staff they told me it was really rare.”

Katie, who lives in Rotherhithe, plans to study graphics, art, English language, and psychology at A-level and has hopes of studying something like illustration, game design or graphic design at university to become a concept artist.