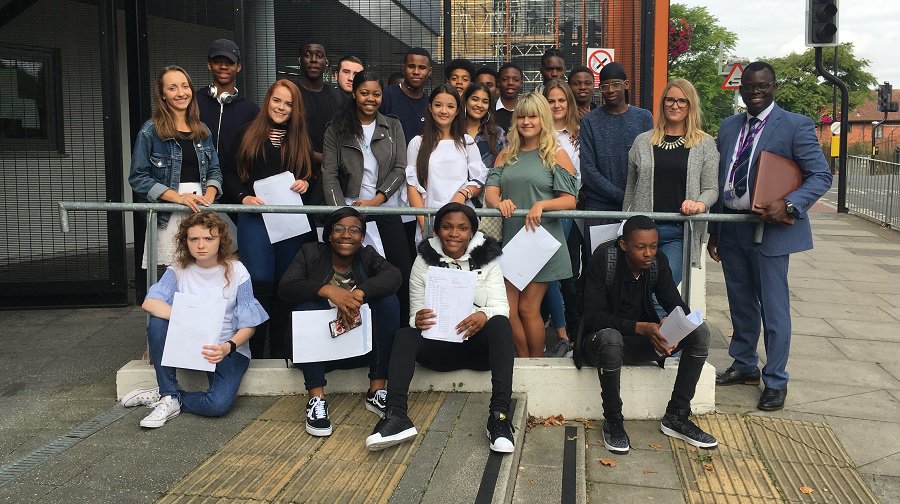 Students and staff at City of London Academy had much to be proud of after 76 per cent of students achieved at least five A*-C passes, including English and maths.

Executive principal Richard Bannister said: “We are delighted our students have achieved our joint best GCSE exam results, despite the Government this year increasing the academic rigour.

“These excellent results are testament to the dedication and commitment put in by our students and the hard work and inspiration provided by our teaching and support staff teams.

“It is wonderful to see so many of our students continuing to choose their A-level studies here at our academy, as they seek to attain their goals of progressing on to prestigious universities.  We wish them all the very best in the future.”

Andrew McMurtrie, chair of the City of London Academies Trust, added: “We are very proud of our students and what they have achieved.

“We wish them all well with their next steps and look forward to welcoming many of them back into the sixth form.”

Mamusu Kamara was over the moon to achieve the top grade 9 in English literature, as well as a grade 7 in maths, 6 in English language, A*s in biology, French, and drama, and As in physics, chemistry, and history.

She said: “I was shocked because in my chemistry exams I cried after the first one because I honest thought I would get a D but I saw the A when I opened my results and then the 9 in English literature.

“I was really surprised and didn’t think I would get it [the grade 9] because all year I was sitting on 7s in literature and 8 in language.

“Towards the end I started putting in more effort and I don’t think I could have got a 9 if it wasn’t for my English teacher Miss Jones because she was my new teacher this year and she was really motivating.”

The sixteen-year-old, who lives in Bermondsey, will go on to study biology, French and English literature at A-level and plans to study biology and French at university.

Harry Daniell was celebrating after passing his exams with a grade 8 in English literature, a 6 in maths and English language, an A in music, and grade Bs in history, science, and additional science.

The sixteen-year-old plans to go on to study music technology, history, and psychology at A-level.

“I felt like I put the most into English because I struggled a lot with English and I was getting low marks for the mocks,” he said.

“Before getting my results, I said to myself ‘you can’t be scared of something you have no control over’ – but when I turned up I was bloody terrified.

“I briefly spoke to my music teacher and she was really happy about the A.”

Aimydj Elenda walked away with one of the highest marks for history in the school.

The sixteen-year-old, who lives in Bermondsey, achieved an 8 in English literature, 7 in English language, 6 in maths, A grades in history, French, and economics, and Bs in PE, science, and additional science.

“I was expecting that I had done well but I had doubts as I wasn’t sure what exact grades I got so walking in here I was like ‘is this really happening, is this real’,” he said.

“I’m going to do sixth form and I’m taking economics, history, and French.”

Rasheedat Sanusi walked away from Year 11 with ten GCSEs.

The sixteen-year-old, who lives in Woolwich, passed her exams with an 8 in maths and English language, a 7 in English literature, A*s in French and biology, As in history, physics, and chemistry, and B grades in music and sociology.

“I’m elated I really did not expect those grades because I felt like some of the tests were a lot harder,” she said.

“I wasn’t doing as well in English during the mocks. I found it really hard to remember everything for the new exams and started off getting a lot of Cs.

“I plan to study A-levels in French, biology, and maths because those were the three subjects I really did enjoy doing during GCSE.

“I definitely want to go to university and I’m looking towards studying accountancy because I like maths.”