One star pupil, Marci Talbot, bagged a remarkable eight 9s, two 8s and an A* in Further Maths 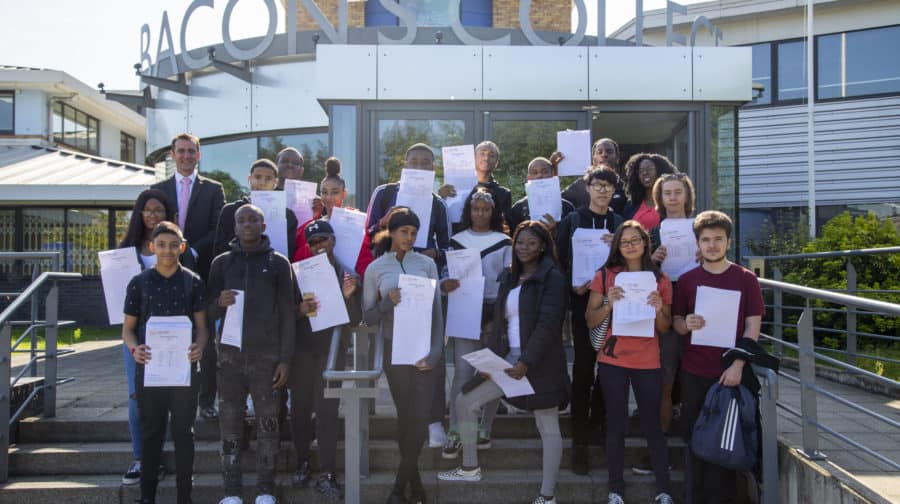 Over two-thirds of pupils have achieved five or more ‘good passes’ including in English and Maths at Bacon’s College today – well above the national average, said the school.

68 per cent of students bagged good passes of Grade 4 or above in five or more subjects, while ‘strong progress’ was also made at the Rotherhithe school in the percentage getting top grades in English and Maths.

Fourteen per cent of students attained these top grades of 7 or above in the English and Maths – an eight percentage point increase from last year.

72 per cent of students achieved a grade 4 or above in both subjects. Principal James Wilson congratulated all of his students on ‘another strong year’ for GCSE results.

“They are testament to the hard work, determination and commitment that students have shown in their studies, as well as the ongoing efforts of staff across our school to help them achieve their best,” he said.

“What is particularly pleasing is the increase in those students achieving the highest grades in English and Maths.

We look forward to welcoming many of them back in September as they join our Sixth Form, where we will continue to challenge, guide and support them towards meeting and indeed exceeding their potential.”

Special mention was given to several star students, one of whom, Nastasia Sadowski, achieved an impressive string of seven 9s, two 8s, and an A* in Further Maths.

Others given recognition for their top grades were pupils Pruthvi Patel, Victoria Adeniran, Jia Shan, Adeeba Kureemun, and William Ly.