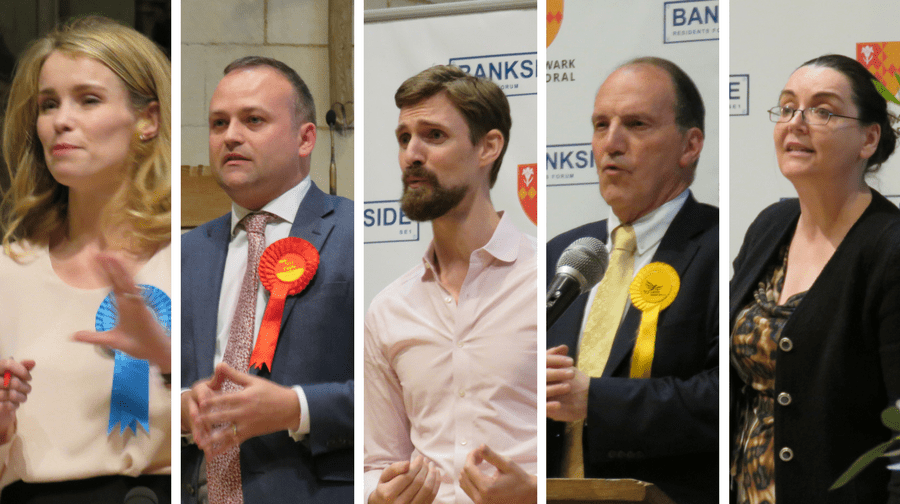 The candidates vying to be Bermondsey and Old Southwark’s next MP gave their views on a second EU referendum, affordable housing and rent controls as they went head to head in the first official hustings of the election.

Five of the six candidates were invited to the hustings at a packed Southwark Cathedral on Monday, May 15, co-hosted by Amir Eden, chairman of Bankside Residents’ Forum, and co-hosted and chaired by Canon Missioner Stephen Hance.

James Clarke, who is standing as an independent, was not invited to the hustings as the organisers only invited those standing for parties represented in the last House of Commons.

Neil Coyle (Labour) is fighting to defend his two-year seat at the general election on June 8, while Simon Hughes (Lib Dem) is hoping the 2015 election was a blip on his previous 32-year career as MP for the area.

Newcomer Siobhan Baillie (Tory) is marketing herself as the “fresh choice” for voters, while John Tyson (Green) experienced his first ever hustings, and UKIP’s Elizabeth Jones told the people to “take back the power” by voting for her.

The candidates made their opening statements before residents had the chance to ask questions on key issues in the constituency.

Conservative Siobhan Baillie went first, telling residents she was the “fresh perspective and set of eyes” for the constituency and that it had been “the Lib Dem and Labour show for far too long”.

Neil Coyle promised to “never vote for anything that will harm our community and to always fight for the best opportunities and resources for our community”, while Simon Hughes said if he was elected his priority would be for the people to decide on the terms of the deal Britain gets from leaving the EU.

UKIP’s Elizabeth Jones told the crowd they should vote for her if they wanted “quality control” over the MP and said we need a “strong community pub action”, while John Tyson said we needed to tackle air pollution, get rid of the bedroom tax, and build more social housing.

When asked about the draft Old Kent Road area action plan, Neil Coyle said he wanted to see that homes built as part of the Bakerloo line extension were sold to local people first.

Siobhan Baillie argued that Southwark Council had control of building and housing development but that “they are not getting it right” and that Labour councils had “got their hands on the ability to build social housing and they are not doing it”.

Small businesses are the “backbone” of our community, according to Simon Hughes, who added that they “are all struggling” and the shopkeepers “think they are going to be moved out”, while John Tyson said we need to protect what we already have.

The candidates were asked what action they would take to make sure genuinely affordable housing would be built if they were elected.

Siobhan Baillie said “there are conditions that can be placed on developers in planning law” and that affordable housing meant “a range of different types of homes including social homes”.

Councils “should be allowed to borrow to spend on housing”, Simon Hughes suggested, promising he would challenge every planning application in BOS with less than 50 per cent of affordable housing.

Neil Coyle said he wasn’t afraid to challenge the council when they got it wrong and that when Simon Hughes had the chance to be in Government, his Government cut Southwark’s budget by £200million and the national affordable housing budget which was “downright deceitful”.

When asked whether they supported rent controls, Neil, Simon and John said “yes”, while Siobhan said “no”, and Elizabeth said the people should decide.

Brexit was bound to be the topic of the day, with candidates asked what they would do to mitigate the ‘damage’ caused locally.

Siobhan said she voted remain but that we “have to move forward” and give the prime minister the best mandate when negotiating a deal.

Neil said the “damage is coming through the system now” and that his job would be to “continue to keep a focus on the costs and consequences and to continue to oppose leaving the European Union”.

According to Simon, we need “the best deal in terms of trade” and to “make sure we have the best freedom of movement”, and John believes we need to protect those people who don’t know whether they can stay in the country.

Elizabeth said she voted out and that she wasn’t pessimistic at all about leaving as she believed “our Brexit will solve quite a few housing problems”.

And on the topic of whether we should have a second EU referendum, Neil said if he had to support another referendum he would want a re-run of an “in/out” vote with sixteen and seventeen-year-olds given the vote, John said the Greens would give the public three options and sixteen to seventeen-year-olds the vote, and Simon said “to accept no deal and to walk away is irresponsible”.

The full list of candidates standing in Southwark’s three constituencies during this year’s general election on June 8 was released last week.

The candidates for Bermondsey and Old Southwark are:

The candidates for Camberwell and Peckham are:

The candidates for Dulwich and West Norwood are:

Voting will take place from 7am to 10pm on Thursday, June 8.

The deadline to register to vote is Monday, May 22. To register in Southwark, visit: www.gov.uk/registertovote

For details of polling stations in Southwark, visit: www.southwark.gov.uk/council-and-democracy/voting-and-elections/general-election-2017