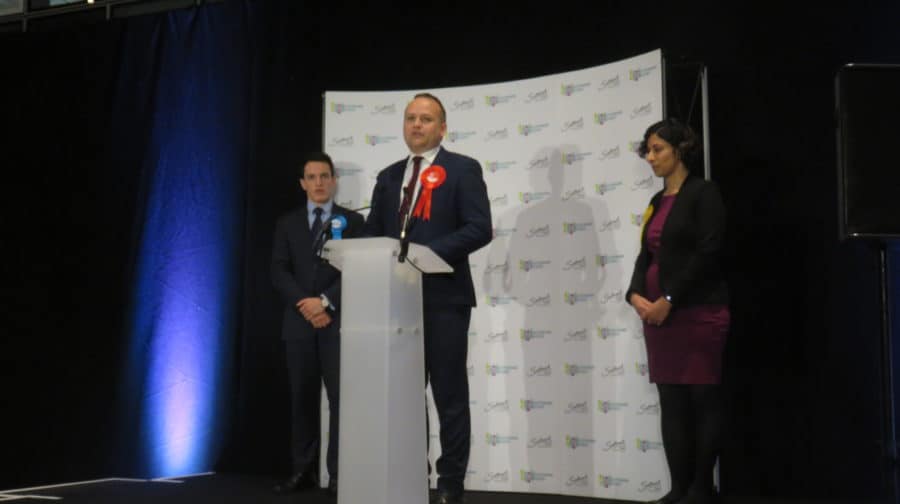 In his election victory speech, Bermondsey and Old Southwark’s re-elected Labour MP Neil Coyle said the Labour Party needs Corbyn to go after a damning result across the country that saw support from its traditional heartlands collapse.

Coyle said his belief all along that an election would be a huge risk for the party was proved right, but shared his joy at the ‘phenomenal achievement’ of Labour canvassers who helped him grow his majority once again and see off the hotly tipped Liberal Democrats.

But there was no avoiding the fact it was a disastrous night for Labour across the country despite success in Southwark.

He described the result, which saw Boris Johnson achieve the Tories’ best performance since the 80s, as “shameful and harmful to me personally for the Labour Party” given what he says is the acceptance by voters that Boris Johnson is a ‘liar and untrustworthy’.

“I didn’t support having an election at this period.

“We knew what the risks were and sadly that has been unravelled tonight but my team of volunteers, campaigners and individuals have reached more than ten thousand individuals since the election was called.

“That is a phenomenal achievement in such a short time and it is a testament to the values that we believe in here as the Labour Party in Southwark. And beyond that, my team who do me proud day in day out.

“This is the team that makes that happen and they are at the coalface of what we see.

“We run a food bank from my office. This has been a very tough decade for this community.

“I acknowledge that the faith that the community have shown for me here, for keeping my promise to never vote for anything that would harm this community, be it Brexit be it anything else, recorded again today, has not been shown for the Labour Party across the country.

“We have to face the reality that despite voters acknowledging that Johnson is a liar and untrustworthy, they chose a Conservative government over a Labour alternative.

“That is shameful and harmful for me personally and for the Labour Party and I hope, I genuinely hope – and I applaud Labour members who gave their all for a Labour government up and down the country – that we come together and we fight for a better party and a better future for our country.

“And a better leadership for our party able to take on the dangers and perils we face in the next four, five years, of Brexit and the damage it does to our community, of the extension Universal Credit, of further damage to the NHS.

“These are the risks our community faces. I am desperate for a Labour government and desperate that the Labour Party does not wallow any longer and moves on as quickly as possible to refill trust with voters up and down this country, so we can be in a better position in the next election.

“So thank you to everyone in Southwark who has put their faith in me again today, it has been my honour and privilege to serve the best borough, in the best city, in the best country.”