However, the National Trust said it could reassure locals the name-change would not be permanent 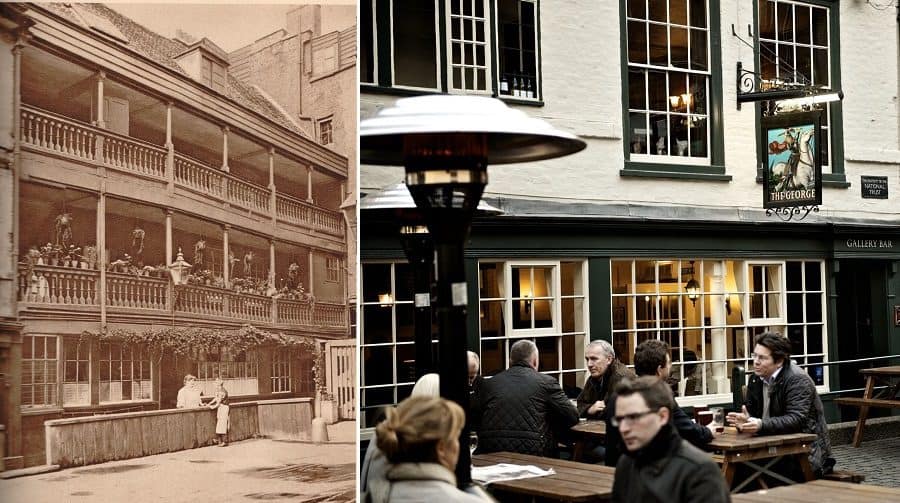 The George Inn, pictured then and now, will be temporarily 'renamed' after an Ed Sheeran song

A historic Borough boozer is to be renamed ‘The Shape of Brew’ – after the Ed Sheeran hit, ‘Shape of You’.

The George Inn on Borough High Street, London’s only surviving galleried coaching inn, will be temporarily ‘renamed’ during a ‘takeover’ by the radio station Capital FM on Friday.

The boozer will be host to an Ed Sheeran-themed event – and so will be dubbed with the moniker for the day.

Other vetoed suggestions for the pub’s name from listeners included ‘The Ale Team’, ‘The Ginger Cock’ and ‘The Pub on the Hill’.

The move comes after the guitar-playing star renamed a pub on his Suffolk estate ‘The Lancaster Lock’, after his wife Cherry Lancaster Seaborn. However, according to reports, the gesture has gotten him into trouble with his neighbours – and may have even earned him a visit from planning officers at the local council.

“We are making an actual pub called ‘The Shape of Brew’ all in honour of Ed Sheeran, we found a pub landlord who gave us his pub,” said presenter Ronan Kemp on-air.

Footie legend Harry Redknapp has even said that he loves the idea so much, he will donate some jam roly-polys to attendees at the event.

“I love it so much I’m going to donate some jam roly-polys,” he said in a voicemail read out to listeners.

The football manager has recently launched a jam roly-poly business, based on his wife’s recipe.

However there’s no need to worry that the new name will stick, as the National Trust, which owns the property, has said it would not be permanently renamed.

A spokesperson said the National Trust could “assure all patrons and visitors” that it “has no plans to permanently change the name of London’s oldest galleried inn.”

“This short-term ‘name change’ was arranged by Greene King in collaboration with Capital FM and is not intended to remain afterwards,” added the spokesperson.