Speaking to the News after being released from prison, George vows to continue climbing 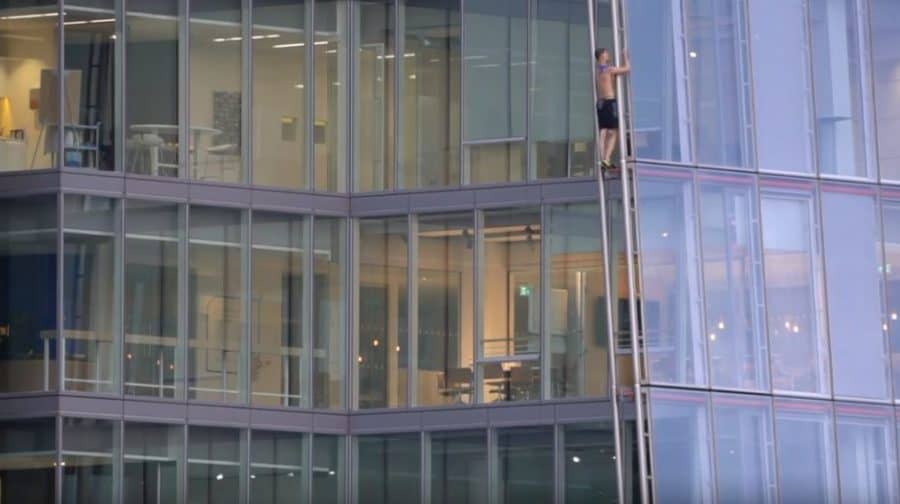 The stuntman who scaled the Shard in just 45 minutes without safety gear has pledged to shock the world again – but won’t reveal how.

George King, 20, was released from Pentonville prison on Friday, after being prosecuted by the Shard’s managers for his daring climb without ropes in July last year.

Mr King served three months of a six-month prison sentence after being found guilty of contempt of court for breaking a court injunction banning climbers from scaling the 1,000ft skyscraper.

Speaking to the News following his release, the stuntman vowed to continue pursuing climbs and said the prison sentence will not break his spirit. He was greeted by cheering supporters, friends and family upon his release from Pentonville, a Category B prison, even including world-famous ‘French Spiderman’ Alain Robert.

“He picked me up in his Mustang and we did a victory lap of Pentonville,” laughed George.

As reported by the News, the climber’s family have previously hit out at the decision to send the-then 19-year-old to Pentonville, alongside those convicted of violent offences.

“The Shard went out of their way to try and incarcerate me,” said George, originally from Oxford. “This is about justice, because it was incredibly unjust.

“I should have been in an open prison, all the prison wardens were quite shocked. I’m definitely still adjusting.”

The Shard’s managing body, Real Estate Management, has said it secured the conviction in the hope of deterring other climbers from endangering themselves, the public and the emergency services. The daring free-climber is well known for his escapades (Image: Instagram / @shardclimber)

The 20-year-old says he saw regular outbreaks of violence, including stabbing attempts, during his three-month spell behind bars.

He warned other climbers that if they wished to repeat his feat that they might face an even heavier sentence than he had been handed.

However he added, if they were willing to take the risk, “then go for it – but I don’t see many people wanting to do it.” George pictured in Vinegar Yard with his mum close to The Shard (Image: Instagram / @shardclimber)

The daring stuntman still plans to climb skyscrapers as part of his projects, which also including finishing writing books he started while behind bars.

But it is unlikely that the next climb will be in the UK, he said, as “I’ve already ticked that box.”

“I plan to shock the world again – but you’ll have to wait and see,” he said.