Is it a pint of Bollocks to Brexit or a Take Back Control with your steak and ale pie, Sir? 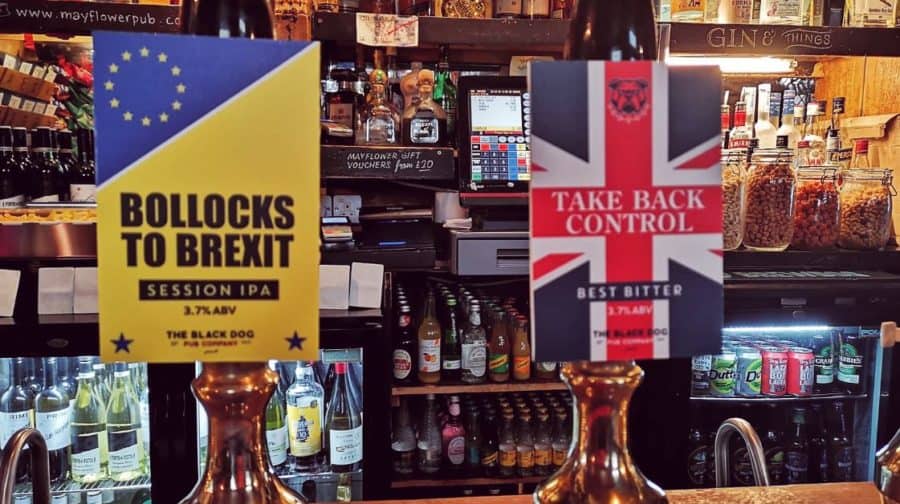 A historic Rotherhithe boozer has found a novel way to heal Brexit divisions – by unveiling Remainer and Brexiteer beer options on tap.

The two new options at the Mayflower Pub in Rotherhithe Street are titled ‘Bollocks to Brexit’ and ‘Take Back Control’, the slogans of both the People’s Votes and Leave campaigns respectively.

The Remain-branded beer is a 3.7 per cent Session IPA, in European Union colours of yellow and gold.

Meanwhile the Brexit-labelled beer is a 3.7 per cent bitter, with a union flag and British bulldog.

“New beers on draught. Which one is your fave?” said the pub announcing its new Brexit-range on social media on Friday.

“Definitely will try a pint of Take Back Control with my Steak and Ale pie when I return to The Mayflower Pub next month,” said customer Christopher Koch.

But another punter, Tom Chivers, quipped that the pub would be paying for the Take Back Control draught “for a very long time.”

A third punter wasn’t so confident the beers would heal divides, adding: “Can see a bar fight happening. I know I’m not paying for a pint from one of those pumps!”

The Mayflower is the oldest pub on the river Thames and takes its name from the ship which took the Pilgrims to the New World, which first set sail from Rotherhithe in 1620.