The statue will be built by May 2018, in the new Walworth Square near Wansey Street 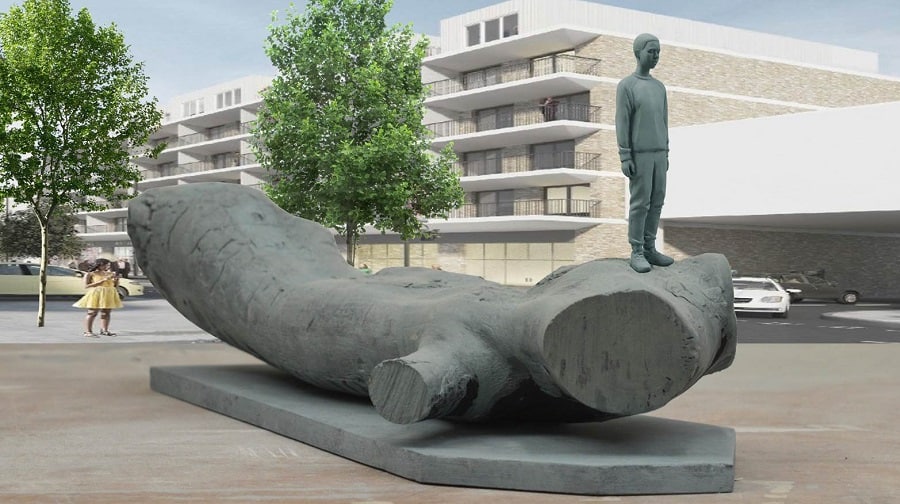 A huge bronze war memorial depicting a boy standing on a fallen tree will be built in the new Elephant Park area of Walworth.

The 6m-long statue will “represent the lives lost by war”, and the boy standing on the trunk “will look to the future”, Southwark Council has said.

It has been commissioned by the council for about £196,000, working with developer Lendlease. And it will be placed in a new public square by Wansey Street.

A planning application is due for submission by next week, and it is expected to be installed in May 2018.

“The first sets in opposition the trauma of war to the idealism of childhood innocence expressed through the fallen tree and the figure of the youth.

“The second is between this horizontal bronze tree and the living trees [that will be positioned around it]. One is memorialised, while the others continue to grow and change.”

The project has been put together in consultation with the Imperial War Museum, the Royal British Legion, Inspire community centre, Artists Studio Company, and the Contemporary Arts Society.

Council leader Peter John said: “This has been a labour of love for many members of the council and the local community and we are very excited to see Kenny Hunter’s beautiful vision come to life.

“The memorial is both a reminder of both the tragedies of war, of all wars and conflicts, and that hope and the human spirit continue, and will be a focal point for the local community to come and pay their respects to lives lost and changed forever.”

A refreshing change from the usual Soviet style Heroics and Melodramatics.