Council says works are necessary and leaseholders are responsible for bills 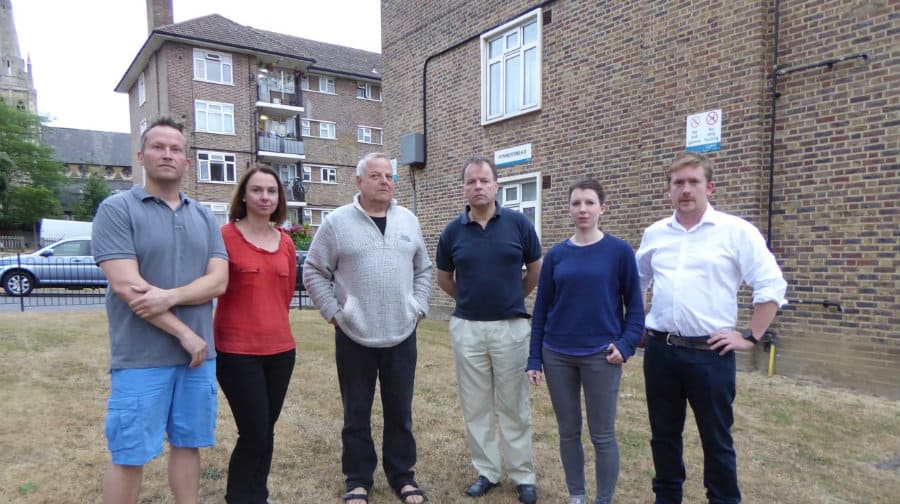 Residents in Herne Hill have been shattered by “absolutely staggering” charges to have the glass in their windows replaced.

The hefty bills have come just eight years after leaseholders in the Pynnersmead and  Denesmead blocks were already charged to have their windows replaced but when the contractor went bust, the works were never completed.

Speaking to the News, leaseholder Andy Hamblin, 36, said he doesn’t even know what he is getting for the £9,000 – £11,000 the council is demanding as it seems even if an individual property does not get reglazed in the end, the owner will still have to pay the full bill, as was the case in 2007.

“I don’t think that’s a very good way to do business. If you had this done to your property you’d expect people to come and tell you exactly what you are going to get for your money,” he said.

Some neighbours have told Andy they will have to move out if the council insists on these charges, while others have had to put their lives on hold. “I’m trying to run a business and I get slapped with an £11,000 bill for something completely unnecessary. Everyone’s put their life on hold. You can’t make decisions based on what you have in the bank,” he said.

Fellow leaseholder, Ru Nash, originally of Georgia, said it was easier fighting the Soviet regime than Southwark Council. “When I came to England in 2002 I certainly did not suspect Southwark Council would have all the powers to try and silence the leaseholders and pretty much corner us into taking on huge unjustifiable costs,” she said, adding that she was “extremely disappointed” at the way officers have dealt with leaseholders with a “computer says no” approach to any questions raised.

Hugh Clements of Denesmead said after one contractor advised the window frames only had two years of life left in them, replacing the glass alone seemed like a “false economy.”

Southwark’s cabinet member for Housing, Richard Livingstone, said: “We appreciate that ensuring our estates are up to the Government standard for decent homes can be expensive, which is why the council offers a wide range of payment plans for leaseholders.

“No refurbishment work is done where it is not necessary to carry out essential repairs and work is competitively tendered to ensure we are getting the best deals and keeping costs as low as possible. Ultimately, if leaseholders do not pay the bills that they are responsible for, then it would mean that council tenants would have to make up the shortfall through their rents. However we would be happy to meet again with these leaseholders to explain our position and hear their views.”

Cllr Livingstone added that the council’s contractor estimated the current frames would last for fourteen years and that some windows were replaced in 2007 but leaseholders were also charged at that time for improvements to communal areas.

Councillor Livingstone is being economical with the truth. The council contractor has consistently stated that the window frames have only 0-2 years serviceable life remaining. It is a separate consultant that has provided a report that stated that they had 5 years life. The 14 years that he mentions is not contained in that report. It is only in a one line addendum to an outline for ongoing works that the 14 year figure is mentioned.
In addition the competitive tender he mentions applies to borough wide works and NOT to the specific glazing works proposed. It is quite clear that if this work had been put out to competitive tender costs would be almost halved.

Could Cllr Livingstone please provide us with a report produced by the contractor referring to 14 years lifespan of the window frames? We have seen the report prepared by the contractor in April 2015 where it specifically refers to the estimated serviceable lifespan being 0-2, and the general recommendations being as follows: “The windows to this block were not in a good state of repair and were at the point of failure. To take options into account, they could be repaired but due to age, defect and the lack of availability of components to repair them this would seem imprudent. For all intents and purposes the only recommendation left in this instance would be to replace them”. Nonetheless Cllr Livingstone would like us to spend £9,000 – £11,000 per year per leaseholder to replace glass only in already failing frames every 7 years.

Southwark Council provided us with a number of spreadsheets for the proposed works on our blocks. We had them reviewed by a number of professional contacts in construction industry and the overall view is that numbers have been pulled out of the air and seem to be exaggerated for the amount of work proposed, on the information given. We asked Southwark Council to fully review the proposed works as well as pricing with the full involvement of leaseholders. Today we received letters dated 23/07/2015 from Jennifer Dawn of Southwark Council informing us that we will be invoiced in March 2016 for the amount of £9,600 – £11,500. This is despite the fact that various officers at Southwark Council, including Cllr Livingstone indicated in writing that there will be a further meeting with the leaseholders to discuss the proposed works. Could Cllr Livingstone please let us know when he is intending to hold the meeting with us? And why are we receiving letters from Jennifer Dawn prior to this meeting?