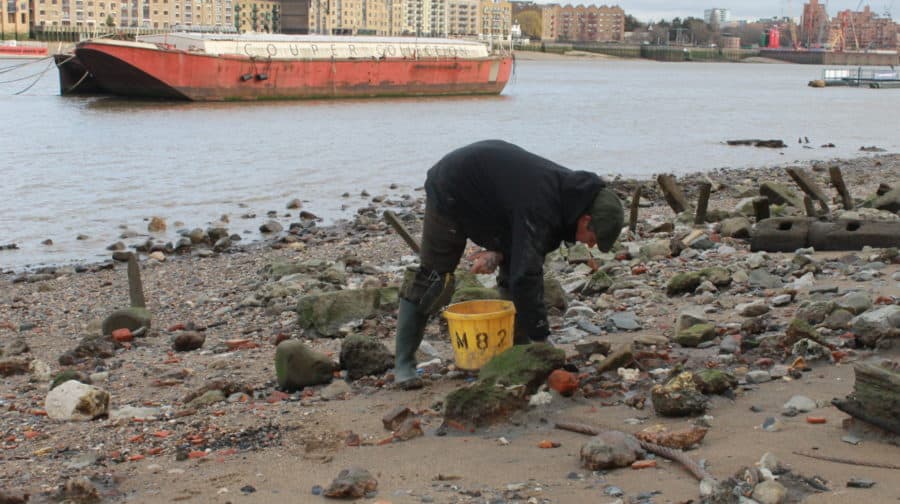 I spotted Alan Murphy chatting on the Thames foreshore, a place where he spends much of his time and has for the best part of 30 year.

He directed me towards the stairs so I could get down to where he had already found an 18th century penny, a couple of cannonballs and several clay pipes – all before 9am. This is where I would interview one of London’s top Mudlarks. Alan was born in Bermondsey but moved to Rotherhithe some 20 years ago. As a boy his playground was the empty warehouses and wharves. He fished by Tower Bridge and – to save his pocket money – collected ledgers lost by other anglers when the tide was out. He found dockworkers’ hooks, knives and the ubiquitous clay pipes, all of which his dad would display in cabinets, because Murphy Senior also had a penchant for the Thames and its history. Today Alan is one of the 52 official Full Mudlarks. He explained how you “go on the list” and spend many years recording your finds and regularly reporting to the Museum of London before you are officially allowed to join the Society of Thames Mudlarks.  Mudlarking is not something you could make a living at; for Alan it’s “an out of control hobby.” His wife calls him a hoarder, though he prefers “Thames recycler.” He donates many of his finds to various museums and projects. Some can be seen at Surrey Docks Farm where his hospital ship pottery is on view, while he also has a small exhibition in Sands Films.

“Most of the artefacts in the Museum of London come from mudlarkers,” he says. The hoarding, however, comes from keeping so many of his finds at home. His personal favourite find is an 11th century Viking coin. “When we last moved my wife said ‘I don’t want the new house smelling like the Thames again’ so I keep a lot of the stuff in my workshop,” he says. The workshop is where Alan cleans and renovates any artefacts that require it, such as old padlocks or coins. It’s where he makes replicas of his original Mesolithic and Neolithic flint axes, using the same method as our Stone Age ancestors.

His knowledge is broad on kings and queens, the different prehistoric ages and maritime history and he shares this wisdom at talks and foreshore trips for schools. Alan loves a cannonball and excitedly tells of the first hand grenades that were used in close quarters by boarding parties during some of the most famous sea battles.

The mudlarker’s ‘patch’ is anywhere from Vauxhall to the Thames Barrier, both north and south shores. There are strict regulations on how deep you can dig and it’s important to be registered because mudlarks are monitored at all times by the river police and the Port of London Authority, who identify Full Mudlarks by the number on their brightly coloured buckets. The bucket shows they are legally searching; stiff fines are handed out to those without permits.

At Alan’s exhibition at Sands Films in Rotherhithe, he allowed me to hold the tooth of a woolly mammoth that once roamed Rotherhithe and let me feel the sharp cutting edge of a Mesolithic flint axe, confirming that Bermondsey Boys were tooled up long before the Teddy Boy era. He showed me shipbuilders’ tools, tea caddy locks, and described the mayhem that cannonballs created when they pierced the side of a ship. He spoke of our primitive forefathers making the weapons to hunt and the tools to butcher animals by the old Chambers Wharf and he showed me groats and ships’ nails and an array of plain and ornate clay pipes.  Each exhibition piece, preserved in time by Thames mud, had its own story to tell and Alan Murphy, Full Mudlark, was the perfect storyteller.

See Alan’s permanent exhibition in the Picture Library at Sands Films, 82 St Marychurch Street, SE16 4HZ. Admission: free. Anyone wishing to go mudlarking on the Thames Foreshore must obtain a permit from the Port of London Authority.