Go-ahead given for Elephant and Castle demolition and regeneration 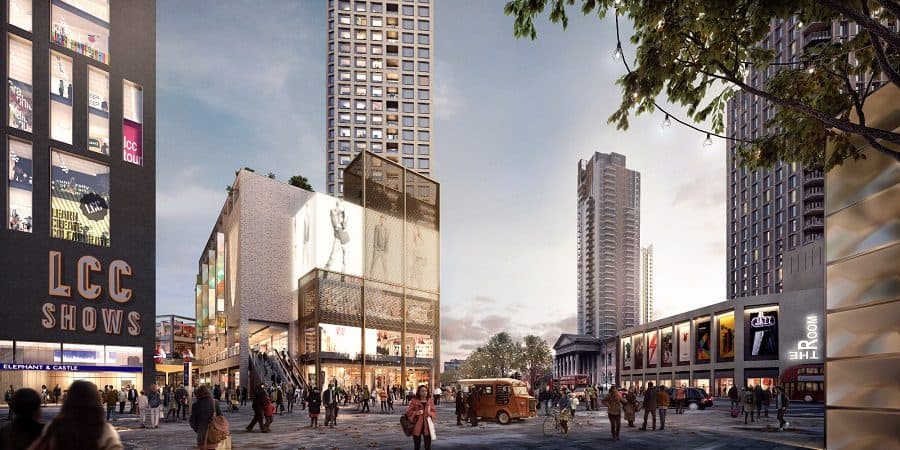 The decision means the condemned shopping centre will close by March 2019 before demolition, followed by years of redevelopment which will bring housing, retail and leisure space including three multi-storey tower blocks.

The scheme will see 979 new homes, a new home for the London College of Communication, and town centre mixed with retail and leisure facilities.

Sources had told the News in the run up to the meeting they felt there was a good chance the scheme would be rejected again, but on the night councillors followed the council’s planning officer’s recommendations with a vote of four in favour, three against, and one abstention.

The close decision came five months after the decision was put on hold at a planning committee meeting in January, when councillors narrowly voted against the plans but decided to defer the final decision until after May’s local elections and while concessions were made by Delancey in the wake of widespread objections.

Since then Delancey has secured £11 million of taxpayers’ funding from the Greater London Authority to increase the number of homes at social rent from 74 to 116 – but it has also reduced the housing offered at London Living Rent while increasing the proportion at ‘Discount market Rent’ in order to make the scheme ‘financially viable’.

The number of social homes and genuinely affordable housing has become a huge sticking point in the developer’s proposals, as has the right of return for mainly Latin American, independent traders, despite a general consensus from councillors that the area needs to be regenerated.

From 5.30pm, protesters had gathered outside the Tooley Street Offices with many waving ‘social housing not social cleansing’ placards.

As the meeting got underway an hour later, committee members were encouraged to balance the benefits of the scheme against its drawbacks – including the impact on ethnic minority communities – with officers advising a ‘yes’ vote.

Councillors pushed Delancey’s investment director Stafford Lancaster on whether it could stump up more of its own funding and plough profits back into the scheme.

Mr Lancaster could not summon up the exact figure needed to make the scheme fully compliant with the council’s own affordable housing policy – but he and planning officers said it would take ‘tens of millions’ and that Delancey was already ‘at breaking point’ with its projected profit margins.

The 35% campaign’s Jerry Flynn, Emad Megahed from the Elephant and Castle Traders’ Association and Latin Elephant’s Patria Roman, put forward their objections, arguing that the centre’s traders had not agreed to the final terms offered, and by being dispersed across different future locations the centre’s community was threatened.

Councillors voted in favour with four approving, three rejecting and one abstention.

Those in favour were swung by Delancey’s new deal– with the caveat that key details on how the rental scheme would be managed, and support given to traders, still needed to be ironed out.

What Delancey now has to deliver

Delancey is now set to deliver 979 new homes, with 35 per cent earmarked as ‘affordable’.

This is controversial because according to the council’s own policy, developments are required to have 50 per cent social rented housing, or 52 per cent at London Living Rent.

116 homes will be social housing, managed by Southwark Council or another registered provider.

Sixteen per cent of the affordable housing offered will be rented at London Living Rent, with eligible for household incomes of up to £60,000.

Discount Market Rate homes, with rent capped at 80% market rate, will gform 161 of the units built – or 49 per cent of affordable homes.

Delancey has also committed to providing a relocation fund of more than £634,000 to support independent traders affected by the demolition, administered by Southwark Council.

Temporary retail space will be created on Castle Square with independent traders given priority, and the future town centre will also offer ten per cent ‘affordable retail space ‘ – capped at 40 per cent of market rent.

Southwark NewsNewsGo-ahead given for Elephant and Castle demolition and regeneration