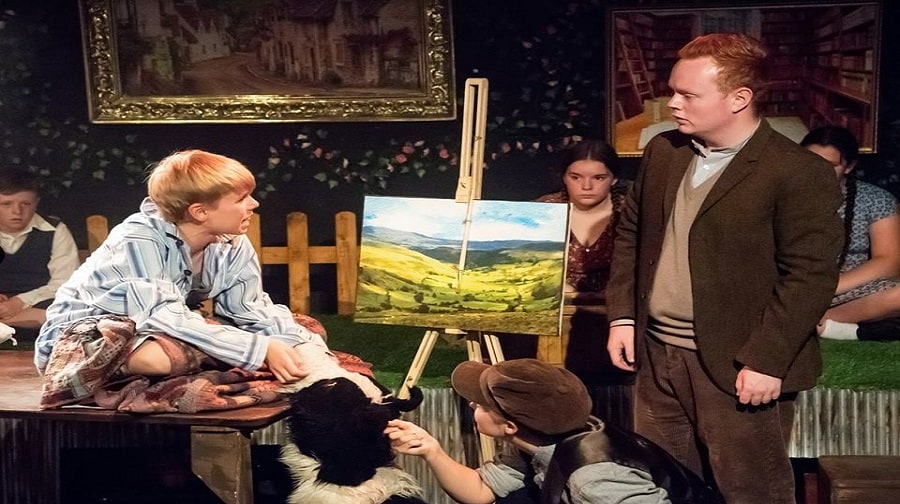 Michelle Magorian’s wartime classic is being brought to life by a cast all aged younger than 23, writes Danny Wiser…

Goodnight Mister Tom can be viewed at Southwark Playhouse until August 25.

Eoin McKenna (role-sharing with James Sampson) is starring in his first professional role as reclusive widower Tom Oakley and remembers watching the film countless times as a child.

The Accrington-actor said he still is nostalgic of when his teachers wheeled out the TV at school playing the original version when he was younger and seems certain that many can relate to that.

“We have had audience responses, people got really emotional.

“It tugs on people’s heartstrings. It is having an impact on people,” said McKenna.

The 23-year-old is delighted to have the chance to remind the public of such an important tale of Mister Tom’s relation with young William Beech.

McKenna, who recently graduated with his Masters from Drama School, believed that despite being set at the start of World War Two there are parallels to today, with the refugee crisis.

“You will sit and watch it and be entertained but also you will leave and feel that there is a strong message about accepting people.

“It will make you leave the theatre feeling like you have spent a really worthwhile two hours.”

On a personal level, the young actor seemed delighted to be performing at The Little.

“I have worked really hard to get here. It got a five star review. It was very surreal.

“The area of Southwark is lovely, it is so nice to be there every day to go to the theatre. It is such a wonderful space. There is a real family feel there.”

Although the University of Sussex graduate sees himself as very different from his character, he believed that he has a lot to teach audiences.

The 21-year-old said everyone in this day and age is concerned with internalising, whilst Mister Tom teaches the important of sharing.

McKenna said: “He is very, very far removed from myself. He is just a character who has been through a lot of personal hardship in his life but he is misconstrued.”

If you would like to watch McKenna and the rest of the young production’s version of Goodnight Mister Tom, tickets can be booked by calling 020 7407 0234.