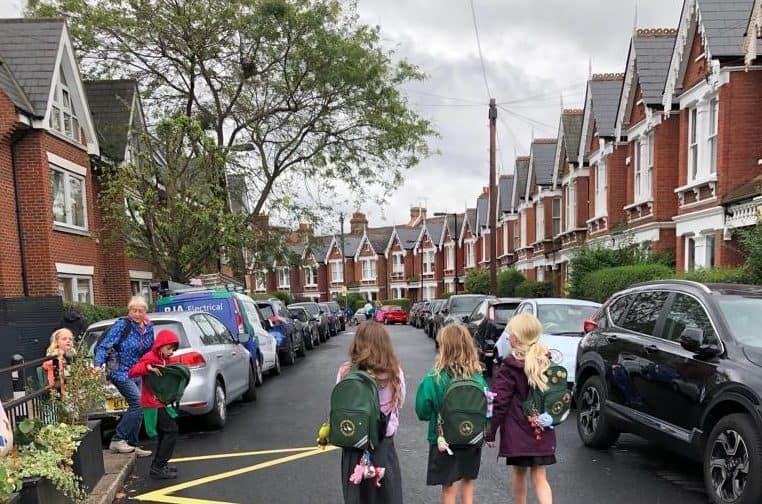 One of East Dulwich’s busiest roads during the school run will be closed to vehicles at peak times, from September until Christmas, to improve road safety and reduce toxic air pollution.

Tintagel Crescent, outside Goose Green Primary, will no longer be open to traffic at the beginning and end of the school day as part of Southwark Council’s School Streets initiative.

In the last few years, the school has made tackling harmful air pollution, which particularly affects children, a priority.

A range of measures include a new green screen of ivy around the school’s perimeter, air purification units in all classrooms, and a “walking bus” to get more pupils walking to school instead of travelling by car.

The school is also an active member of the council’s Cleaner Air for Southwark’s Schools Network.

Scientific readings show toxic emissions in the playground have halved at the school since these measures were put in place – meaning the entire school now falls within EU legal limits for nitrogen dioxide.

Head teacher Simon Wattam said: “We want to focus on pupil and community engagement and behavioural change as well as the necessary “sticking plaster” mitigation measures.

“That is why we are delighted to be working with the council to trial School Streets and help parents and children choose active travel as well as implementing measures such as the green screen and classroom air filtration.”

Councillor Richard Livingstone, the cabinet member responsible for the environment portfolio at Southwark Council, said he was delighted by the support shown at the school from parents, pupils and teachers.

“The team at Goose Green have an exemplary model for bringing about improvements to air quality at their school,” he said.

“We would invite all of our schools to get in touch with our sustainable travel team to see what they can do too.”