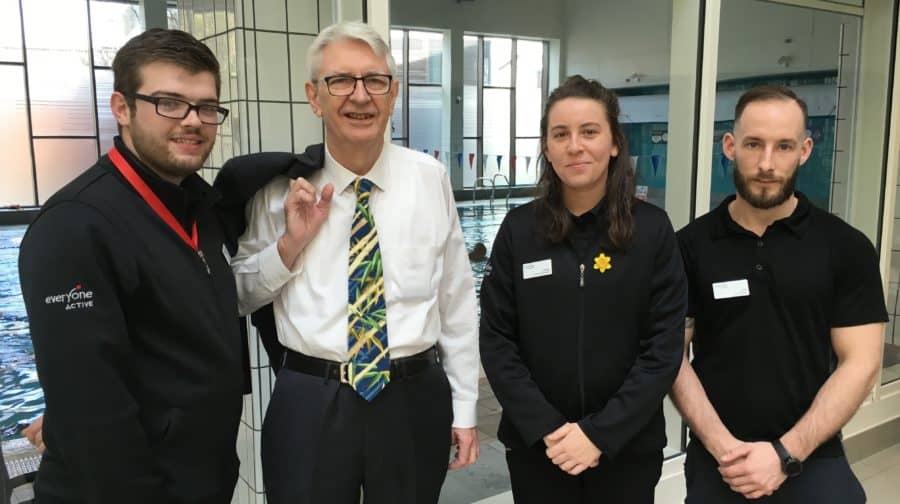 A grandfather whose chances of survival were ‘one in a million’ after he suffered a heart attack while swimming has returned to The Castle Centre to thank the quick-thinking staff who saved his life.

On Thursday, April 11, six weeks to the day of his heart attack, seventy-seven-year-old Jim Bourlet returned to the Everyone Active leisure centre near Elephant and Castle to thank the lifeguards and staff on duty that day.

At the time of his attack Jim – who had stents fitted ten years ago – had felt completely normal as he prepared for his usual swim.

But while in the water he blanked out and was brought to the poolside by lifeguards who began performing CPR, and give him two defibrillator shocks when they realised his heart had stopped beating.

The retired university lecturers who now works part time for an economics think tank, and has lived near Elephant and Castle for 50 years, was unconscious for twenty minutes in total – with no heartbeat.

Miraculously, the father-of-two and grandfather-of four-has now made a full recovery after regaining consciousness in hospital.

The paramedics who took him to St Thomas’ told he’d had a ‘one in a million chance’ of survival.

He praised the quick thinking of the lifeguards and leisure centre staff, and credited his 20 lengths every-other-day habit with helping him recover so quickly.

“The stents effectively sorted out the ‘plumbing’ in my heart but the heart attack was the result of the ‘electrics’ failing,” he said.

“I consider myself lucky to have made a good recovery and have lost nothing in terms of my abilities or memory.”

“I think a lot is owed to the fact that I’ve kept fit all my life and for the last 20 years have done my best to swim 20 lengths every other day.

“It’s not a huge amount but it is regular. I’m sure that helped me survive my heart attack and recover well.

“The moral of my story is that you should never give up on CPR however hopeless it may look. If you find yourself giving first aid, keep trying until the paramedics arrive.

“I am only here today because the extraordinary Everyone Active team acted swiftly and persevered with their effort.

“My life was in their hands and I can’t thank them enough for what they did until the ambulance arrived.”

He has now had a resynchronisation therapy defibrillator fitted to guard against another heart attack, and says he hopes to be back in the water within weeks.

General manager, Trevor Pardoe, said: “We are delighted to see Jim has recovered so well and it’s a wonderful gesture on his part to return to thank the team in person.

“We look forward to seeing him back in the pool when the doctors give him the green light to resume swimming.”