The £2bn development will create a "high-rise jungle." 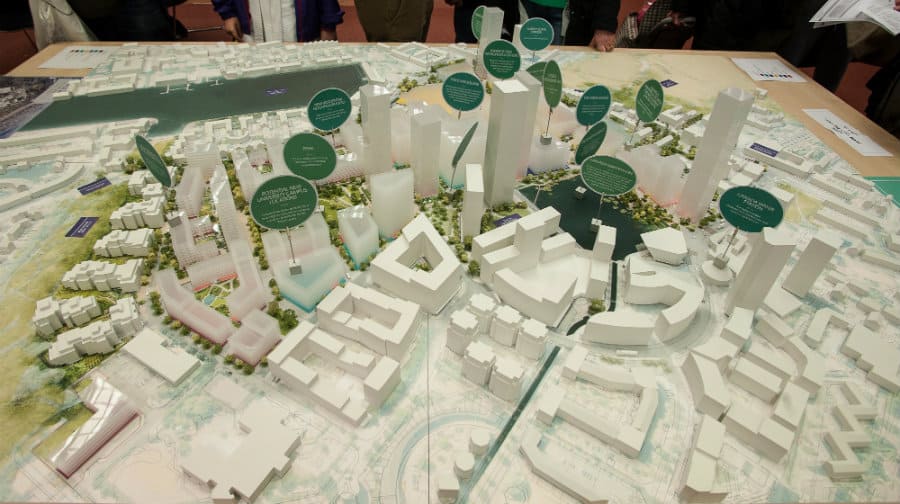 A 3D model showing the potential development in Canada Water

The Green Party has called for a “radical rethink” to plans to develop Canada Water into a new £2bn town centre.

The proposals, which were revealed last month at a series of exhibitions, shocked some residents, who described it as a “high-rise jungle.” The 5.5 million-square foot development includes five ‘landmark buildings’ towering up to 50 storeys in height, plus another two towers of at least 21 storeys and numerous others measuring between six and fifteen storeys.

The Green Party has now  outlined its objections to the project, with London mayoral candidate Sian Berry urging developers British Land and Southwark Council to go back to the drawing board.

She said: “From what I have seen, this masterplan seems to be an unpopular development which hasn’t won over the support of the existing community. Nobody disputes that we need many more new homes in London. But we also need to site them sympathetically and that means persuading the local community of the benefits of a scheme, rather than imposing it on them from on high – literally so, in this case.”

Southwark Green Party leader Colin Boyle declared that Rotherhithe “will be lost” and replaced by a “high-rise, densely packed urban landscape, with all the pressures on transport and amenities that impact many other parts of inner London.”

He said: “At Canada Water, this means building new homes, including new genuinely affordable homes for local residents, as well as new schools, a new leisure centre, and a new thriving town centre. We are working with TfL to make sure there is significantly more transport provision at Canada Water including more Jubilee Line and Overground services, more buses, removing the Lower Road Gyratory, extending cycle hire and building a new pedestrian and cycling bridge from Rotherhithe to Canary Wharf. There are over 12,000 families on Southwark’s waiting list for homes and developments like Canada Water will make a significant contribution in helping these Southwark residents find a home.”

An artist’s impression of the new Canada Water town centre

How can Mark Williams praise this oppressive mini-Manhattan with its 22% “affordable” housing when Sadiq Khan pledges 50% for new developments? I bet no-one involved with these plans has to use the local train stations at peak time.

Don’t let developers run the Council and our home environment.

Protect our open spaces and our nature reserves.

British Land’s interests in making ever taller buildings are against our interests.

The Developer is not going to take feedback from the residents of the area.

Give us a decent leisure centre with a 50 meter pool as originally intended. We need proper sports facilities for adults and children. Not a little pool that will be reduced to 18 meters permanently during school times!