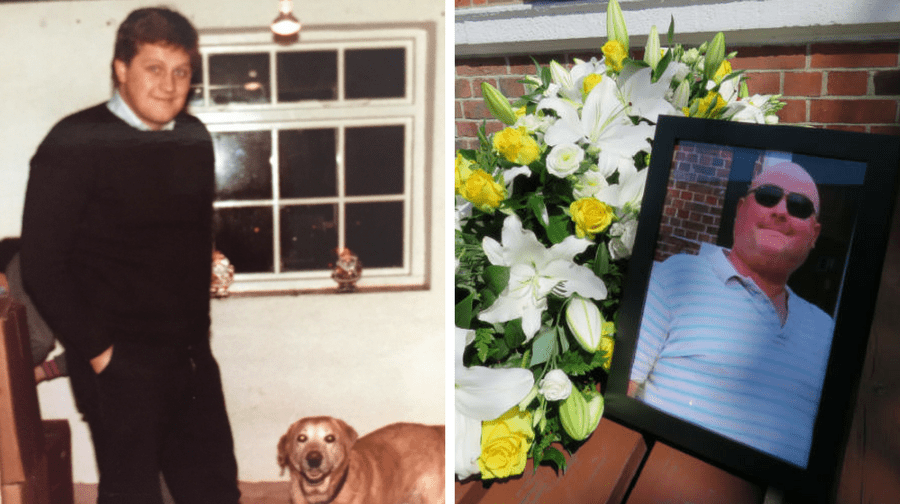 Left: What is believed to be the last photo taken of Gomer Wyn-Roberts at his parents' home in north Wales in 1985. Right: A tribute to Gomer after he died in Peckham in 2016

The grieving sister of Bermondsey’s ‘gentle giant’ – who she last heard from almost 28 years ago – has publicly thanked his friends for paying for her brother’s funeral.

A desperate search for Gomer Roberts’ family was launched last May after the popular local was found dead aged 53 in his home.

His Bermondsey friends finally clubbed together and stumped up the cash so that he wouldn’t have a pauper’s funeral, after their search proved fruitless.

Now, almost a year later, his long-lost sister – who was adopted with Gomer in South Africa when they were babies – has contacted the News to give her thanks to readers, after discovering the tragic news online.

Gomer (middle) aged seven, pictured with Bronwen, then five, and their cousin Cemlyn, then two, in Henley in 1969

Bronwen Wyn-Roberts (now Vearncombe) told the News that Gomer, whose full name was Meurig Gomer Wyn-Roberts, was last seen by his family in1989 when he “disappeared off the face of the earth” at the age of 27.

His sister last saw him when they were both visiting their parents at their family home in north Wales.

She says he was his “usual self” when he disappeared and that he even had plans to buy a flat in north Wales, which made it all the more shocking when years passed and he failed to get in touch.

Bronwen, now aged 53 and married with two children, only found out Gomer had died in Peckham last year, after desperately searching for him online last week.

“It was my birthday on March 9 and I had been to watch that film Lion about the Indian boy who got adopted and it really inspired me that it took him 25 years to find his mother,” said Bronwen, who lives in Hampshire.

Gomer with his sister Browen, mum Wendi, and aunt Beti

“I got home, it was about 11pm and I decided to Google it again and came across the article on Facebook.”

Gomer, born in July 1962, and Bronwen, born in March 1964, aren’t blood related, but were both adopted by Wendi and Leslie Wyn-Roberts.

Their adoptive parents, both from north Wales, had lived out in South Africa for about ten years and decided to move to Henley-on-Thames, near Oxford, when Gomer was five, to give their children a good education.

“It was a great upbringing,” said Bronwen.  “My father had a good job and Gomer went to a really nice private school and I went to the local comprehensive. We had a happy childhood. He always loved his rugby and he was always huge for his age.

Left: Gomer with his parents Wendi and Leslie. Right: Gomer, aged about ten or eleven, with his dad Leslie and his paternal uncle Dennis

“He didn’t go to uni; he wasn’t the uni type. He did some work in London and had lots of different jobs. When I started working in London I used to see him regularly.

“He could charm anyone. He was good looking, with blue eyes and blonde hair and women would fall at his feet. He was just larger than life. He knew everybody and was very popular.

“He would travel around a bit and get into a bit of debt and my father would bail him out. He was lovable really, but I think there came a point probably where it wasn’t fine.

“When I got married in February 1990 he didn’t make the wedding and he didn’t get in touch at all.

“He was always flitting about – the longest I knew him to have a job was for twelve to eighteen months and then he would move on – so the first year or so we just thought he was doing something and that he would show up.

Gomer (back) with friends in London in later years

“But after about a year or so my parents thought they would go and find him and my dad spoke to the Salvation Army and hired private detectives.

“He spent a lot of money looking for him over the years and before he died in 2004 one of the last things he said to me was about my brother – and it broke my heart to know that he died not knowing what he was doing and my mother just couldn’t talk about it anymore, it was too upsetting for her.

Read more: Bermondsey spirit will give Gomer the farewell he deserves

“On birthdays and Christmases I would search for him. I was working in London for quite a while and I thought I might bump into him on the Tube. I would go to rugby matches at the Millennium Stadium in Wales and even sang on the pitch and I would think ‘you’re probably here somewhere’.

“It’s really gutting to think that that hope isn’t there anymore and he’s gone, and at such a young age.”

When their mother died a couple of years ago, Bronwen had an obituary published in a number of newspapers and online, in the hope Gomer would see it and get in touch.

“I thought he would be devastated,” she said. “I made it searchable so people could find me, but nobody phoned that telephone number.”

In a cruel twist of fate, a reader posted the obituary in the comment section of a Wales Online article about Gomer’s death – but nobody called the contact number which would have notified Bronwen of his passing.

Read next: Bermondsey’s ‘gentle giant’ put to rest after friends pay for funeral

“It’s really sad to think that there was no one [from his family] there for him at his funeral, but he didn’t want to be found,” said Bronwen. “I have no idea really why he disappeared.”

Bronwen plans to travel to Bermondsey in the near future to meet Gomer’s friends and thank them in person for paying for and arranging his funeral. “I want to speak to his friends and find out a little more about him and some answers and I just want to know that he was happy,” said Bronwen. “Someone told me he’s got a daughter and I would love to meet her.

“I want to thank his friends because he had some great ones by the looks of it, who stood by him and raised money. I will be forever grateful, because they were there for him and I want to repay them for that.”

“It’s absolutely amazing what they did and I’m just sorry that they couldn’t find me.”