Guns, ammunition and drugs seized by Specialist Crime officers on the streets of south London

Officers recovered what appeared to be a Scorpion sub-machine gun, a revolver and about 100 rounds of ammunition 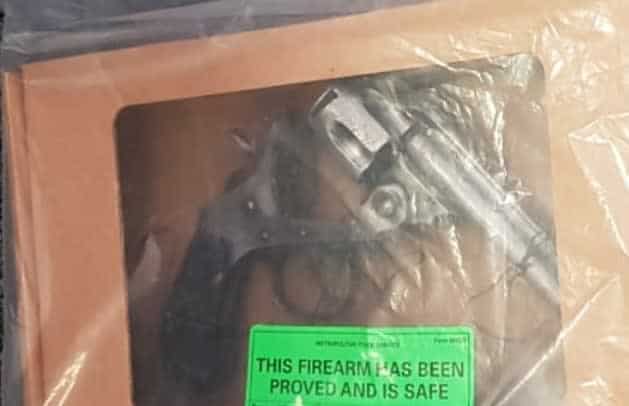 Despite the lockdown police are cracking down on the drug trade in the capital and this week recovered a large quantity of drugs, a sub-machine gun, revolver and about 100 rounds of ammunition off the streets of south London.

Specialist officers from the Violent Crime Taskforce (VCTF) last Thursday afternoon in Brixton gave pursuit to a 28-year-old man on a moped who failed to spot.

He had come to their attention at around 1.35pm on Brixton Road and they were quick to catch and detain him.

The man was searched and a large quantity of a cannabis was found on him. He was arrested on suspicion of possession with intent to supply a Class B drug (cannabis), failing to stop for police, dangerous driving, drug driving and going equipped to steal.

While police were dealing with, he shouted to a man on the other side of the road. The second suspect, immediately started running and made-off towards Crammer Road, in nearby Oval, where he was stopped and arrested on suspicion of conspiracy to supply a Class B drug (cannabis).

Officers searched an address and a vehicle in the SW2 area linked to the second suspect – a man aged 30. After searching the vehicle, officers recovered what appeared to be a Scorpion sub-machine gun, a revolver and about 100 rounds of ammunition.

The firearms were made safe, secured and sent off for classification and forensic testing.

The 30-year-old, was further arrested for possession of a firearm.

Both men remain in custody at a south London police station. Detectives from Trident, part of Specialist Crime, are leading the investigation.

Meanwhile over in north London, at around the same time officers from Specialist Crime stopped and detained a 24-year-old man in Silverston Way, Brent,  recovered approximately half a kilogram of cocaine. Detectives searched an address linked to this suspect where they recovered two firearms, which have been confirmed as viable submachine guns, a large quantity of live ammunition, a large sum of cash, about one kilogram of cocaine and drug paraphernalia.

Commander Craig Turner, from the Specialist Crime Command, said: “These two fantastic jobs resulted in four lethal weapons being taken off the streets of London, as well as a large amount of ammunition and Class A and Class B drugs. Each round of ammunition seized could have been a life lost and both these cases show the strong link between drug dealing and violence.

“I’d like to reassure the public that even during these challenging times, we will be relentless in tackling gun and drug-related criminality; and we will work to prosecute those involved in violence and organised criminality “

Southwark NewsNewsGuns, ammunition and drugs seized by Specialist Crime officers on the streets of south London