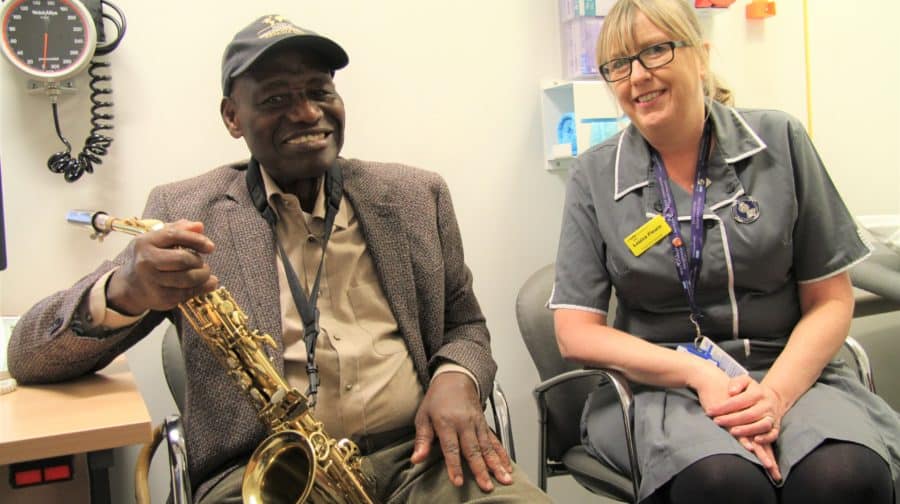 Rex pictured with Guy's nurse, Louisa, whom he has dedicated an album track to

Rex Martey, from Sydenham, has performed in pubs and clubs across London for over six decades, and has finally achieved his dream of getting an album released.

One of the tracks on the album, called African Touring Holiday, is even dedicated to the nurse who primarily treated him for his prostate cancer at Guy’s.

“This is a dream come true for me because I have been singing and playing sax for a long time,” said the 81-year-old.

“But my health has been deteriorating for many years and I have been coming to Guy’s as a patient since 1983.”

His condition is currently stable, but requires him to have dialysis three times a week under the care of Guy’s renal and urology services.

Rex, a long-term patient at Guy’s, where he is being treated for prostate cancer, has landed his first album deal aged 81

Mr Martey paid tribute to his care, saying: “I always say to people, if it wasn’t for Guy’s and St Thomas’ I would be dead.”

A quarter of the sales from his album will go towards the Guy’s and St Thomas’s charity.

“Ten years ago my health was deteriorating and I remember saying to a clinician at Guy’s and St Thomas’ that I wanted to get an album out there to show that I have been here,” said Mr Martey, who is originally from Ghana.

The Afrobeat album, music which comes from West Africa, is being distributed by Animal Farm Music, and has ten tracks.

“One day I was coming home from the hospital and I was thinking about how sweet and how helpful Louisa was, and such a lovely lady,” added Rex.

“I told my wife that I wanted to write a song about her and she was happy with that.”

African Touring Holiday is available on Bandcamp here as well as Amazon. The album and tracks are also on Spotify.