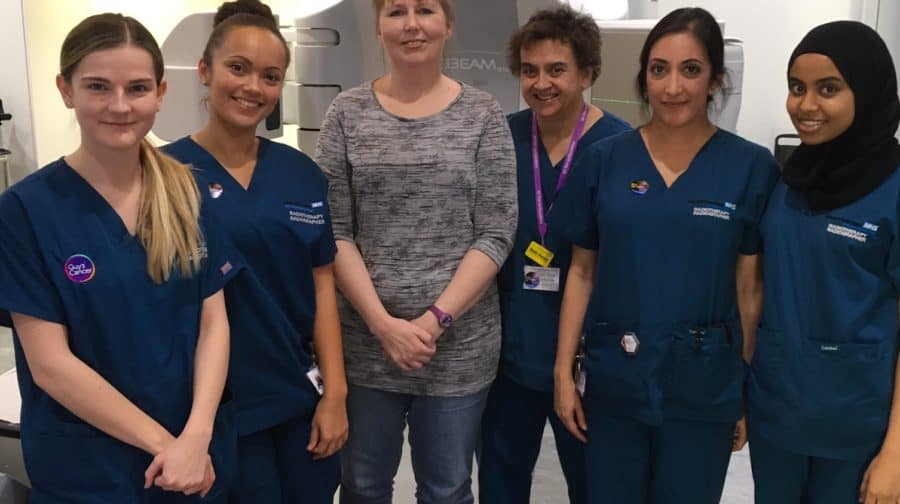 Corinne Nash, pictured centre, was the one hundredth patient at the hospital to receive the cutting-edge cancer treatment

Doctors at Guy’s Cancer have treated their 100th brain cancer patient using a trailblazing form of radiotherapy targeting tumours to the closest half a milimetre.

Patients wear a mask like a balaclava to keep their head still, while a tracking system helps to position them. If they move, the radiation beam switches off, so that only the tumour is targeted.

The innovative procedure means that brain cancers can be treated more accurately and comfortably than before.

“SRS is suitable for small tumours which may be difficult to remove surgically or where surgery is likely to be associated with a high risk of side effects,” said Dr Ronald Beaney, a consultant clinical oncologist at Guy’s and St Thomas’.

“Using such highly accurate and non-invasive technology means we can treat brain cancer patients with more comfort and accuracy than before.

The centre is only one of seventeen in the UK to have the capacity to deliver the cutting-edge treatment.

Corrine Nash, 49, from Rainham in Kent was the one hundredth patient to be treated using the surgery.

She said: “The radiotherapy took about an hour but felt shorter than it was. I’m quite claustrophobic so I closed my eyes and tried counting.

“The team asked me what kind of music I liked and played some good songs.

“I remember they had The Proclaimers song I’m Gonna Be (500 Miles).”

But, she added, “it was quite hard not to sing along which would have involved moving.”

The procedure’s accuracy allowed radiotherapy treatment to small areas of the brain while reducing the amount of radiation healthy tissues receive.

“This reduces the chance of possible side effects from the treatment,” explained Angela Francis, head of radiotherapy at the Trust.