'We’re doing this for our patients,” said Dr Rovira, one of the doctors running. 'Knowing that we’re fundraising for them definitely keeps us going.' 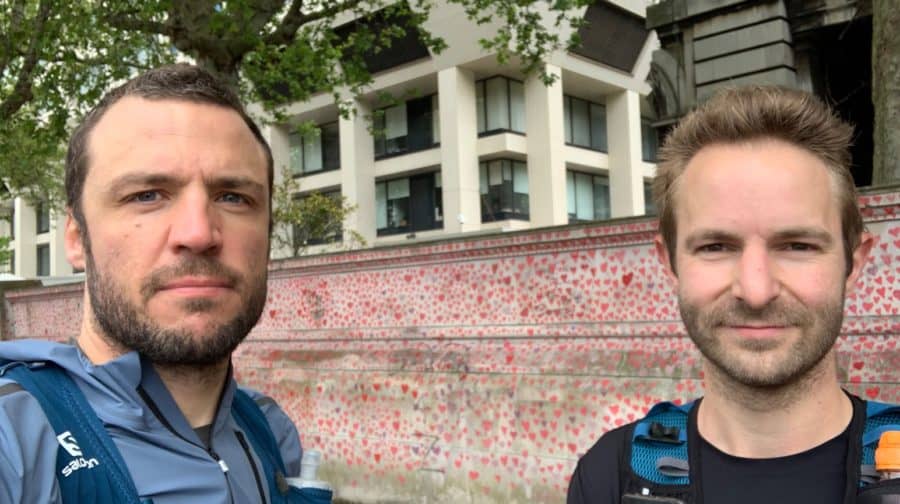 Two men are set to run 100 kilometres for charity on Saturday (November 13) as part of a 550-kilometre odyssey.

Dr Benjamin Miller and Dr Aleix Rovira from Guy’s and St Thomas’ have been doing a monthly run, starting with a distance of ten kilometres, then adding an extra ten kilometres to the next run.

The money they raise will go to the new Guy’s Head and Neck cancer centre.

Dr Miller, an ear nose and throat registrar, said: “The first few months were fine as we’d run those kinds of distances before, but from there it kind of spiralled out of control and now we’re doing these insane runs that we would never have contemplated before.”

The most recent run – 90 kilometres – took nearly thirteen and a half hours to finish, with the runners starting at midnight.

The runs normally start at Guy’s Hospital. For the twenty-kilometre run Dr Miller pushed his two young children Zara and Casper in a buggy. 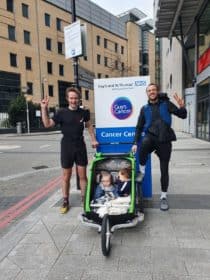 Dr Miller said: “Some of the longer distances have been really difficult at times, but also surprisingly nice. We’ve got to see some places we’d never have visited and we’ve challenged ourselves to do something we never thought would be possible.”

Dr Rovira, a head and neck consultant, added: “We’re managing to do things which months ago would have sounded unbelievable. The 100 kilometre run will be the icing on the cake. I’m sure we’ll suffer a bit but the feeling at the end will be great.”

The two doctors are encouraging people to join them for part of the run. Friends, family and colleagues are set to take part in the final stretch, from Hyde Park to Guy’s Hospital.

Dr Rovira said: “In the delirium of some of our longer runs, Ben and I have talked about how amazing it would be to have others join us for the run, like in Forest Gump! Everyone is invited to join us at any point, particularly at the end as we cross the finish line.”

The two men’s fundraising is part of a wider set of activities by head and neck cancer staff that has raised more than 100,000 in total.

Staff have taken on ten activities over ten months, either individually or in groups, including triathlons, swimming challenges and bake sales.

All of the money raised will go towards different projects to help patients with head and neck cancer.

“We’re doing this for our patients,” said Dr Rovira. “Knowing that we’re fundraising for them definitely keeps us going.”

There are more than fifteen areas within the head and neck where cancer can develop, including the mouth and lips, voice box, throat and nose. Despite advances in treatment, many of those diagnosed with head and neck cancer still die.